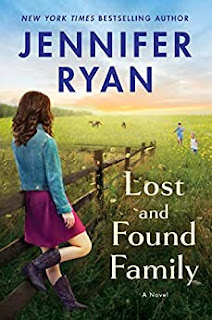 Two years ago, Sarah lost her husband, Sean, leaving their two boys fatherless and the company they owned nearly bankrupt. Since then, she has rebuilt their software company into a thriving business, though it comes with the expense of working long hours. The children’s grandmother, Margaret, hasn’t seen them since Sean’s death, but since the woman blames Sarah for his death, it is for the best to not continue the festering. Out of the blue, Sarah receives a letter from Margaret’s attorney, Luke Thompson, with a demand that she bring the children to visit their grandmother for six weeks or she will take her to court for custody. Rather than fight it, Sarah agrees to the visit.

Sarah and her two boys arrive in Carmel at the home of Margaret. The reception is chilly, compounded by the fact that Luke Thompson is also there. Margaret immediately starts throwing accusations about Sarah and how badly Sean was treated. Sarah tries to remain calm. She chose to not tell her mother-in-law the truth about Sean in order to keep Margaret’s memories of her son happy. But for the next six weeks, her patience is tested. Meanwhile, Luke continues to grill Sarah. She disputes a lot of what he is accusing her of yet won’t elaborate. Luke decides to get a detailed background check on Sarah and the circumstances of Sean’s death. He soon learns some surprising things that have his views of Sarah changing. Luke is soon attracted to Sarah. Margaret warns him that Sarah will reel him in like a Black Widow. Is Luke making a mistake? What is the truth behind Sean’s life and death?

A family torn apart by the death of a prodigal son and father is the central theme in LOST AND FOUND FAMILY, a family drama set in Carmel. Sarah was raised in foster homes until a dastardly uncle claimed her, and then he abused her. She was finally discovered by her father, but the damage was done. Sarah earned her way to college and graduated with honors. It is there that she met Sean, a charismatic man who not only married her, but he also used her grit and intelligence to start a software company. It is clear as this tale opens that Sean wasn’t the perfect husband everyone had thought him to be. But sadly, he painted Sarah as a self-absorbed woman who pushed Sean over the edge. In fact, Sarah is the one who kept the company afloat. It is Sarah who worked (and continues to do so) long hours even as she nurtures her two adorable boys.

Margaret is still grieving over losing Sean and it’s easy to understand why she blames Sarah. Her plan is to take her grandsons away from their mother because Sean had told her that Sarah was an unfit mother. Throughout most of LOST AND FOUND FAMILY, Margaret’s feelings about her daughter-in-law don’t change. Meanwhile, Luke is slowly discovering Sarah is not the pagan he expected. She works long hours—often into the early morning hours—but is always there for her sons. Soon, he is falling for her. Since he knows the truth about Sean, when will he tell Margaret?

LOST AND FOUND FAMILY is filled with emotion and drama as Sarah tries to avoid a confrontation with Margaret. Luke wants to help Sarah, but she refuses. How long will he be forced to sit silently while Sarah is belittled by Margaret? The truth will eventually come out, and when it does, will it lead to a change in the relationship between the two women? Find out about all the drama and emotion by buying a copy of LOST AND FOUND FAMILY.

Sounds like a great storyline. Would love to read it.

Sounds like a similar book I enjoyed by Susan Mallery with a mean grandmother in the "Sweet" series; it was the final book in the series. So I am looking forwarding to reading this one as well.

This sounds like a great book! I love books with this kind of "family" drama. Thanks for the great review!