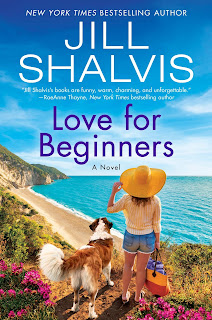 A year ago, Emma Harris had the best life possible. A fiancé who loved her and a best friend who stood by her side. But after she is run over in an accident and ends up in a coma, she wakes up months later to learn that her fiancé and best friend were now in love with each other. Determined to make a life on her own and be independent, she moves into a rental apartment owned by her physical therapist’s family. Her PT, Simon Armstrong, is hunky and all, but Emma is not in the market for a new love interest. Her one love right now is her emotional support dog named Hog. The St. Bernard is there whenever she needs him. Emma is looking for a job other than the few hours a week she currently works at the doggy daycare, Paw Pals. However, she is still recovering from her injuries, and finding the right job is hard to do.

Simon is professional when it comes to treating Emma, but even he has to admit that he finds her attractive. However, he has his hands full taking care of his father who had a stroke, plus running the family business and continuing to work part-time as a PT. Simon’s cousin, Ali Pratt, does the books for the business and is a big help to him, but she is restless, searching for something else. Ali recently broke up with Ryan, and they “share” custody of their dog, Killer. Ryan ended things with her because he felt she was holding back in their relationship, and he wanted her to open up to his friends. Ali is an introvert, though her mouth has been known to run off a few times. One of those times is when she realizes that Simon rented the upstairs apartment to Emma, her high school nemesis. To say those two women don’t see eye to eye is an understatement. Yet, despite their rivalry, they have more in common than they realize.

It is a new beginning for Emma in LOVE FOR BEGINNERS, the latest tale set in fictional Wildstone. Emma’s life changed forever the day she stepped off the sidewalk and was hit by a car. She feels guilty because she wasn’t checking for traffic, and because a passenger in the car that hit her died, leaving a man a widower. She was in a coma for months and awoke to find that her body was in a lot of pain, and she had to relearn her skills. Even her memory isn’t the same. But the biggest blow to waking up was learning that her fiancé and best friend were now in love. For this reason, Emma is now afraid to love again. Why face that pain again?

Emma is determined to get her physical health at full strength but continues to run into roadblocks when it comes to finding a job. Then, she learns Paw Pals is on the market. Dare she try to buy it? Will anyone loan her the money? There is an attraction brewing between Simon and Emma, but they both seem determined to have it not go anywhere. Except, well, the late nights spent together on the rooftop at the apartment building have them growing closer. Will it lead to something beyond a friendship?

Ali is prickly when it comes to forming relationships. She blames Emma for why she lost out on going to her dream college and instead, ended up in a dead-end job in Wildstone. Readers will have to read LOVE FOR BEGINNERS to get the lowdown on their long ago run-ins. Meanwhile, Ali and Ryan dance around the fact that they are still attracted to each other despite their breakup. She doesn’t understand why she must be the one to change. Isn’t accepting someone for what they are part of love? Ali and Emma have a sparring start to their “reunion” in LOVE FOR BEGINNERS, but they soon become friends. Where will it lead?

What would you change if you had to start your life—and love life—over again?

When Emma Harris wakes up from a coma she learns that her fiancé and her BFF have fallen in love, she’s lost her job, and the life she knew is gone. Overwhelmed but grateful to be alive she starts over from scratch. Not as easy as it sounds, of course. But she’s never been a quitter, even if she wishes she could quit rehab, where her hot but evil physical therapist, Simon, puts her through the wringer.

Eager for a new beginning, Emma opens a doggy day care. Unfortunately, the only space she can afford is owned by her childhood nemesis Ali Pratt. But hey, she’s been through worse, right? She tries to roll with the punches, but a friend drops his grandpa off at the doggy day care in desperation then on top of that, she and Ali bring the term ‘frenemies’ to a whole new level. And then another grandparent shows up. And another.

In the midst of all that, Emma realizes she’s accidentally fallen for Evil PT. But the most horrifying thing of all is that Ali just might have turned into the best friend she’s ever had. And as Emma grows from the pain of her past and takes on her new path, she comes to realize that life isn’t what you’re given, it’s what you make of it.

I love her books and this series, I highly recommend reading it
Penney