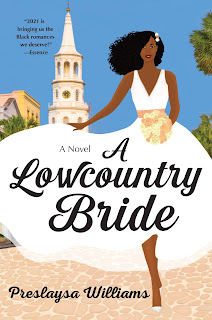 Maya Jackson has worked for Laura Whitcomb, Inc, a renowned New York City bridal gown brand for years and dreams of becoming Head Designer. She has the talent, she just needs a chance to showcase her unique style. Due to an illness, she’s always prioritized her career over her personal life until Maya’s father fractures his hip and she returns to Charleston, SC. While home for only a few months, she’s thrilled to find an opportunity at the local bridal gown boutique, never expecting sparks to fly with its owner...

A military veteran and widowed father, Derek Sullivan hopes to save Always a Bride from bankruptcy in order to preserve the legacy of his family. He also wants to reconnect with his estranged, twelve-year-old daughter, who is still recovering from the loss of her mother. The last thing he needs is a relationship with a beautiful, smart, complicated woman who will be leaving soon.

When Derek begins to fall for the lovely Maya, he knows there’s no future. But destiny has its own plans, and these two lonely people with big hearts discover that coming home to love is the best gift life can give.

Dress designer Maya Jackson has been working in New York City under a famed bridal gown brand. She has hopes of becoming the company’s Head Designer, though her boss keeps shooting down her ideas to sell gowns that would appeal to Black-Asian brides. Maya suffers from sickle cell anemia, but it hasn’t stopped her from pursuing her career. After her widower father falls and breaks his hip, Maya decides to temporarily move home to take care of him. Maya’s career is important to her, but her father’s health is now a top priority. Unfortunately, she has little paid time off, and while her boss will keep her job open, she will have no source of income. So, Maya decides to see if she can sell wedding gowns rejected by her boss in Charleston. At the recommendation of her father’s friend, she approaches the owner of Always a Bride shop.

Derek Sullivan inherited his mother’s bridal shop and is finding it difficult to keep afloat, all the while he is trying to raise his motherless daughter. After Maya approaches him about selling a few of her gowns at his shop, he first rejects the idea, but soon changes his mind. Maya has some unique bridal gown designs that catch the eye of brides, including the daughter of the governor. Derek hires Maya and the business takes off. And a romance is soon brewing between the shop owner and his new assistant. But Maya still has plans to return to her old job in New York City.

Maya was diagnosed with sickle cell anemia when she was a child and told she had ten to fifteen years to live. She takes medication and treatment to lessen the symptoms. Derek’s wife was killed during a mass shooting at her church, and he and his daughter Jamila are still struggling over their loss. As readers can see, A LOWCOUNTRY BRIDE is an emotional read that will tug at your heart. How will Maya and Derek come together? Maya has worked hard for her employer, but whenever she tries to get her employer to approve ethnic-based wedding gown designs, she is shot down. Will she finally prove her gowns are in demand?

Meanwhile, Derek is nearly tearing his hair out. He has no idea how complicated it would be the run a bridal shop. He was in the military when his wife was killed, then his mother, who owned the shop, died.  It’s just him and Jamila and he wants to do what’s right for her by keeping the family legacy open. Derek doesn’t have time for female relationships, but Maya intrigues him. However, she keeps the secret about her illness from him at first. How will he react? How does Jamila feel about having Maya around, especially since her dad appears interested? Will the shop stay afloat?

A sweet and emotional tale that will have you rooting for Maya and Derek, A LOWCOUNTRY BRIDE delves into how much a wedding dress can mean to the bride beyond the marriage itself because it’s a reflection of the bride and her heritage. An intriguing and entertaining read, be sure to not miss A LOWCOUNTRY BRIDE.