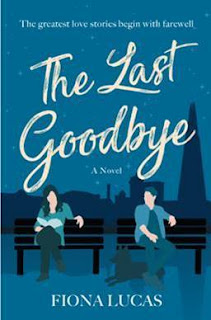 Spencer was the love of Anna’s life: her husband, her best friend, her rock. She never thought she’d have to live a day without him, but a tragic accident took him away. Anna lost not only her soulmate, but her future, her spirit, and her will to truly live. Three years later, she promises herself she’ll stop calling Spencer’s phone just to hear his voicemail greeting but, after lashing out at her best friend on New Year’s Eve, Anna sinks to a new low. She dials his number and waits for his voicemail. To her shock, someone answers…

Brody has inherited Spencer’s old number. Living a life of solitude in the countryside, Brody’s social interactions were limited to conversations with his dog Lewis, and he preferred it that way until Anna’s first call. Now, as their calls become lengthier and more frequent, Anna realizes Brody is the first person who truly understands what she’s going through. He listens to her grief instead of pushing her to move on, and slowly, she rediscovers how to live, love, and laugh again. Meanwhile Brody finds himself coming to rely on Anna’s calls, feeling renewed purpose every time he sees her number light up his usually lifeless screen. He too feels empowered by their conversations and decides to go on his own journey of self-discovery.

As they near the one-year-anniversary of their first call, Anna issues Brody a challenge: meet her at midnight on New Year’s Eve. But Brody hasn’t been entirely honest with Anna. Will his secret threaten everything, just as it seems she might find the courage to love again?

For any fan of classics like P.S. I Love You, Sleepless in Seattle, and The Notebook, THE LAST GOODBYE is an uplifting and deeply human look at what it means to live each day to its fullest.

Fiona Lucas is an award-winning author of contemporary women’s fiction. She has written heart-warming love stories and feel-good women’s fiction as Fiona Harper for more than a decade. Fiona lives in London with her husband and two daughters. See more at https://fiona-lucas.com.

"A poignant and uplifting read about loss, love and learning to put yourself back together again after facing the unimaginable."

“Full of relatable characters and beautiful language, The Last Goodbye is a moving portrayal of the imperceptible twists of fate that are always conspiring to lead us on our way. Fiona Lucas writes about love, loss, forgiveness and finding the next chapter with warmth, humor and deep tenderness. This is the ultimate feel-good read for right now!”

"This brilliant and gorgeous book tackles the big, unwieldy parts of being human—love, loss, grief, and the unexpected healing power of connection. I was totally absorbed."

What if you called the phone number belonging to your late love and someone else answers?

It’s been three years since Anna lost her beloved husband, Spencer. To hear his voice, from time to time she has called his cell phone and let it go to his voice mail. Feeling lonely on New Year’s Eve, she calls his number…and a strange voice answers. Rather than hang up, Anna begins to talk to the stranger. She learns that his name is Brody and that he recently acquired Spencer’s old number. Brody has a sympathetic ear for Anna as she talks about losing Spencer and how miserable she has been. She also tells him about her strained relationship with her mother-in-law and how Anna doesn’t know whether she can get past her grief. Brody tells her that he has suffered his own grief but doesn’t reveal the details. Anna is soon placing more calls to Brody, who has now become her sounding board. How much in common do Anna and Brody have? Is he leading her on in hopes of catfishing her?

THE LAST GOODBYE is a haunting, emotional read as Anna—and Brody—deal with their grief through talking with each other. We don’t learn at first about his loss, as the author slowly builds that up until the dramatic reveal late in the book. But Anna’s loss is front and center of this tale. She feels like she could’ve prevented Spencer’s death and that regret has its grip on her. She is consumed by grief, and it is not helped by her mother-in-law, who seems bent on removing Anna out of the family’s memory of Spencer. Instead of talking to each other, the two women are at silent odds against each other, with occasional outbursts. Anna wants to maintain peace with her mother-in-law, but how can she tolerate the hurt that’s inflicted by the other woman?

Brody lives a solitary life out in the middle of nowhere. He is afraid of crowds and when forced to go into places like a grocery store, he invariably suffers a panic attack. Readers will wonder what drove him to his solitary existence and his social anxiety issues. As the months go on and Brody and Anna continue to talk over the phone, a connection develops between them. Will they ever meet face to face? Can Anna—and Brody—get past their grief and get on with a life that is happy?

Readers will be pulled to the characters of Anna and Brody in THE LAST GOODBYE. Their pain is palpable, and it is going to be difficult for them to move past their grief. But hopefully, they will help and heal each other. Getting there is likely going to rip off the bandages they have put on their hearts. A beautiful and touching tale, don’t miss THE LAST GOODBYE.