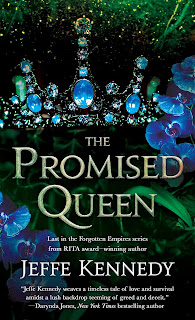 Claim the hand that wears the ring, and the empire falls.Conrí, former Crown Prince of Oriel, claimed the hand that wears the Abiding Ring, but the prophecy remains unfulfilled. Queen Euthalia of Calanthe returned to her island kingdom, but broken in mind and body. With the blood of war unleashing ancient terrors, Calanthe isn’t the haven it once was.Lia must use her magical bond with Calanthe to save their people while Con fights to hold off the vengeful Emperor Anure and his wizards. Con and Lia will have to trust in each other―and in love―to fend off ultimate disaster.

In the last book, THE FIERY CROWN, Conri retrieved his wife and queen Euthalia's dead body from Emperor Anure's Yekpehr palace. The Emperor's powerful wizards killed her. On the ship escaping back to Luthalia's Island of Calanthe, the wizard Ambrose brought her back to life.

On the way back to her home, Euthalia (Lia) doesn't remember what happened and is very weak. Her connection to Calanthe's island magic, as tied to the creature below the island, is gone. Conri tells her he loves her, but Lia tells him with her death their marriage bond broke. She also knows she and Conri will eventually be forced to separate. If he ends Anure's reign, he will become the king of his father's realm of Oriel. She must reconnect to Calanthe.

Conri will do whatever it takes to protect his Lia and work to gain her love and trust. It will be an ongoing battle. The second battle he must make is to return to Yekpehr, the seat of Anure, and free his sister Rhéiane and the other realms' ruling families that Anure captured and kill Anuer. Before he can leave he must make sure Lia will be safe. Calanthe has problems. The creature below the island is wreaking havoc on the island with storms and erosion. Not only is the island in peril but also the island's inhabitants.

This is the last book in this series, and it is as enchanting as the previous volumes. The relationship between Conri and Lia has changed just as things have changed between Lia and Calanthe. Moreover, both characters change dramatically in outlook both internally and externally becoming more accepting of themselves. Author Jeffe Kennedy has created another intriguing, imaginative, and alluring story fantasy-romance enthusiasts will want to read.

I have a print copy of this book. Read something a little different. Post a comment to be entered.