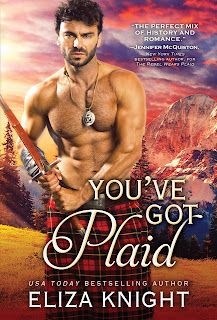 This Highlander is determined to help his enemy’s daughter get safely home, even if it means his own defeat...

Brogan Grant, a Jacobite soldier and bastard son of the Chief, fought savagely on the battlefield and barely escaped capture. On the run for his life, Brogan comes across what he thinks is a spy—a very bonny lass disguised as a lad, who happens to be the daughter of his clan’s enemy. He admires her bravery, but he knows what can happen to a woman alone in a war-ravaged land.

Lady Fiona MacBean is determined to do her part to ensure there is a Scottish king. Disguised as a healer, she delivers coded messages to rebels throughout the Highlands. There’s only one thing impeding her mission—a striking Highlander who’s determined to send her home.

Unfortunately, Fiona will not be deterred, no matter what the sexy Scot says. Left with little choice, Brogan agrees to join her mission if she agrees to return home when it’s over. Now the two must work together and risk everything to save the life of Bonnie Prince Charlie himself. If only their hearts weren’t at risk as well…

ELIZA KNIGHT is an award-winning and USA Today bestselling author of over fifty sizzling historical romances. While not reading, writing, or researching for her latest book, she chases after her three children. In her spare time (if there is such a thing…) she likes daydreaming, wine-tasting, traveling, hiking, staring at the stars, watching movies, shopping, and visiting with family and friends.

“What are ye doing?”

Fiona MacBean, second of four children born to Chief MacBean and his stronghearted bride, turned around to see her three siblings standing obstinately in a line, hands on hips, feet tapping.

Her elder brother had a knowing smirk on his face, as though he’d caught her red-­handed. Her younger brother, Ian, was emulating Gus to a T, and sweet Leanna, the youngest of the brood, waggled her brows at Fiona in a way that meant she had a secret and was having a hard time keeping it in.

Fiona pulled her hands away from the gap in the tree and tried to clear her expression of anything other than annoyance.

“I’m just looking for eggs in a quail’s nest.”

“Nay, ye were no’. Just tell us what ye found.” Gus narrowed his eyes, the same way their father often did.

“I told ye, the squirrel ran up the tree. He was running in a circle just here.” Fiona zigzagged in front of the tree, and then hurried behind it before coming around the front and pretending to scurry up the bark.

“We know what ye do when ye come out to the woods,” Ian said, looking up at Gus for approval.

“Aye, we know,” Leanna added, not wanting to be left out.

Fiona crossed her arms and scowled. “The lot of ye are a bunch of storytellers.”

Fiona clenched her hands, forgetting she held the slip of paper that had been folded neatly and shoved into the nook in the tree.

“Read it to us,” Leanna added.

“Hand it over. If ye dinna, we’ll only be forced to take it from ye.” Gus held out his hand.

At twelve years old herself, Fiona didn’t often take orders from her brother, born just shy of eleven months before her. But if he were threatening to tackle her to the ground, that was something entirely different. Gus was bigger than her, having just shot up another four inches in the past summer. But she was faster…

Fiona took off at a run.

As a little girl, she’d spent a great deal of time running through the forest, her feet slipping on leaves, boots catching on roots. She’d hidden in the hollows of trees, leapt over fallen oaks, slid down embankments. There was no nook or cranny in the forest she’d not claimed as her own. And as much as her siblings tried to find her in every single one, they were not always successful.

Her father didn’t like her traipsing off alone in the forest, especially not with the uprising. The damned loyalists, who she assumed were the English when he said it, had been a nuisance to all their hides for as long as she could remember.

Fiona had been born just a couple of years before the first Jacobite rising in 1715, and in fact, on her second birthday, her da had been away meeting with a war council along with other prominent Scots and titled men from England. Had fought beside old King James, and proudly showed his battle scars whenever he was a bit too deep in his cups. He’d been a sprite man of about twenty-­five back then. There’d been a few more battles since, but none won, as yet. That didn’t mean they were going to give up.

Every year, Fiona went with her father to a secret meeting of the lairds and earls and other warriors to discuss their latest plans. They thought she was off gallivanting with her friends and siblings, not paying attention. Which she mostly was, but she was also very good at spying, and so the children often had her listen in on the talks, then bring back the news of what she’d learned.

There was one particular lad who seemed keen on her skills. His name was Aeneas but he asked her to call him Aes, and he had a smile that could melt the heart of even a lass who spent more time than not irritated with lads, namely her brothers.

He’d caught her one of the days listening in on an important conversation.

She didn’t see him in the hall with any of the other children, nor did she see him accompany any of the lairds. Aes was just as much a mystery to her as anyone else.

When she talked with her friends Jenny and Annie about him, they couldn’t figure out who Aes was, either, so they spent their days and evenings searching out the boy with the soot-­colored hair and a mischievous grin. But he only seemed to show up when Fiona least expected it, and when her friends weren’t around, to prove he wasn’t a ghost.

Every year she saw Aes, and their fondness for each other grew. Just this past spring, he’d told her he didn’t want to wait until next year to see her again. Fiona suggested he write to her instead, to which he wrinkled his nose. If he was writing her letters, her father would want to know who he was, and he’d want to read them.

Fiona had asked what was wrong with her da knowing who Aes was, but he said it was best no one knew, so they’d sketched a map of the wood surrounding her family’s small lands, and she’d drawn an X on the spot where there was a tree with a secret nook that she often hid pretty rocks in. If Aes could find it and leave her letters there, their friendship was meant to be.

She’d been checking that tree for months, and today was the first time she’d found anything—­a piece of folded paper, and she’d be damned if she was going to let one of her sticky-­fingered siblings get their hands on it.