Promo: Talk Bookish To Me by Kate Bromley 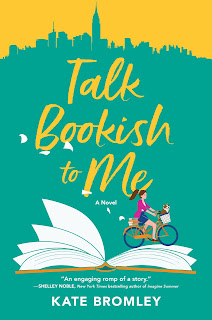 Inspiration can come from the most unlikely—and inconvenient—sources.Kara Sullivan’s life is full of love—albeit fictional. As a bestselling romance novelist and influential Bookstagrammer, she’s fine with getting her happily-ever-after fix between the covers of a book.But right now? Not only is Kara’s best friend getting married next week—which means big wedding stress—but the deadline for her next novel is looming, and she hasn’t written a single word. The last thing she needs is for her infuriating first love, Ryan Thompson, to suddenly appear in the wedding party. But Ryan’s unexpected arrival sparks a creative awakening in Kara that inspires the steamy historical romance she desperately needs to deliver.With her wedding duties intensifying, her deadline getting closer by the second and her bills not paying themselves, Kara knows there’s only one way for her to finish her book and to give her characters the ever-after they deserve. But can she embrace the unlikely, ruggedly handsome muse—who pushes every one of her buttons—to save the wedding, her career and, just maybe, write her own happy ending?

KATE BROMLEY lives in New York City with her husband, son, and her somewhat excessive collection of romance novels (It’s not hoarding if it’s books, right?). She was a preschool teacher for seven years and is now focusing full-time on combining her two great passions – writing swoon-worthy love stories and making people laugh. Talk Bookish to Me is her first novel.
RRT's Review:

TALK BOOKISH TO ME – Kate Bromley

Romance novelist Kara Sullivan is helping her best friend Cristina with her upcoming wedding as well as dealing with an impending deadline for her next book. The last thing Kara needs is a distraction. Meeting up with Cristina’s fiancé after the bridal shower, Kara is stunned to come face to face with Ryan Thompson, the man who broke her heart in college. Turns out that Ryan grew up with the groom—something that Kara didn’t realize. Seeing Ryan again brings forth a tumult of emotions for her. She had loved him and thought they had a life together—until he cheated on her with another woman. Their “reunion” is awkward, though it appears everyone else isn’t feeling uncomfortable that the exes are in the same room. Ryan is staying with the happy couple—along with his bulldog—as they had been kicked out of the hotel room he’d rented. To Kara’s utter horror, her friends offer Kara’s extra bedroom as a place to stay. Kara reluctantly agrees. The dog is cute—even it if takes over the only bathroom—and things are awkward with Ryan staying there. But soon, the old sparks fly between Kara and Ryan. Will they rekindle their old romance since they are now both single?

Kara has sold several books, but this latest one that is due very soon is causing a headache because she has writer’s block. As the maid of honor in Cristina’s wedding, she has plenty of things to do to help the bride, plus she plans to head to Italy shortly after the wedding to spend several months there. Kara doesn’t have time to get involved with her ex again. Yet, seeing Ryan and talking to him brings up the old attraction between them. Something that should be wrong feels so right. What’s wrong with having a fling while he’s visiting in New York City? But as things deepen between them, Kara begins to wonder if the man she once thought she would spend the rest of her life with is the one…again. Will they work things out—or break up again?

TALK BOOKISH TO ME is a cute, funny tale in the chick lit vein of fiction. Kara on the surface appears sophisticated and cool, but deep down, she’s worried about relationships and men. Ryan isn’t the reason Kara is suffering from writer’s block, but could his presence be why she suddenly starts writing again? As they talk and reconnect, the old hurts from the past slip away. Meanwhile, Kara must keep Ryan’s presence at her apartment a secret from her mother because a mother will almost always want to protect her child. Ryan’s betrayal hurt Kara, but is there enough between them to start over again? Or is it just a fling? There are plenty of laugh out loud scenes—between Kara trying to hide the fact that she’s sleeping with Ryan, and the wedding preparations that sometimes get crazy.

Will Kara get her happily-ever-after, or will the reunion with Ryan prove to be short lived? Will she get that book finished and off to her editor? How about her planned trip to Italy? Find out the answers to those questions—and more—by grabbing a copy of TALK BOOKISH TO ME.