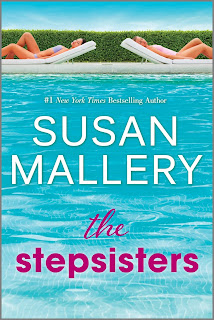 #1 New York Times bestselling author Susan Mallery pens a love story of a different sort…a heartfelt tale of friendship between two women who used to be sisters.Once upon a time, when her dad married Sage’s mom, Daisy was thrilled to get a bright and shiny new sister. But Sage was beautiful and popular, everything Daisy was not, and she made sure Daisy knew it.Sage didn’t have Daisy’s smarts—she had to go back a grade to enroll in the fancy rich-kid school. So she used her popularity as a weapon, putting Daisy down to elevate herself. After the divorce, the stepsisters’ rivalry continued until the final, improbable straw: Daisy married Sage’s first love, and Sage fled California.Eighteen years, two kids and one troubled marriage later, Daisy never expects—or wants—to see Sage again. But when the little sister they have in common needs them both, they put aside their differences to care for Cassidy. As long-buried truths are revealed, no one is more surprised than they when friendship blossoms.Their fragile truce is threatened by one careless act that could have devastating consequences. They could turn their backs on each other again…or they could learn to forgive once and for all and finally become true sisters of the heart.
RRT's review by me:

Many years ago, Daisy’s dad married Sage’s mom, and the couple soon had a daughter they named Cassidy. But the marriage didn’t last, and Sage moved with her mother and half-sister to a home paid for by Daisy’s father. During the time that the girls all lived together, there was a lot of friction between them, which means they aren’t close. It didn’t help that Daisy married Sage’s first love, Jordan, and, to everyone’s embarrassment, during the wedding ceremony Sage declared that she still loved Jordan. To say there is no love lost between Sage and Daisy is an understatement.

After her third marriage ends, Sage moves from Europe back to Los Angeles. One day she is out driving and spots Daisy pulled off to the side of the road in her car with a child. Sage stops and inquires if she needs help. Daisy’s daughter had just gotten sick in the car and she is trying to comfort her little girl. Then, the car won’t start, and Sage offers to drive the two to their home. Their interactions are awkward, with Daisy just barely not being hostile toward Sage. But Sage maintains her cool and soon leaves to return to the home she now shares with her mother, who is still looking for a rich man to take care of her. Sage has gotten a couple of jobs and is hoping to save enough money so that she can get her teaching certificate and move out of her mother’s house.

Daisy’s life is spiraling out of control. Her husband, Jordan, just notified her via text that he is moving out as he no longer wants to be married. The news blindsides Daisy, which means her coming face to face with the wicked stepsister was just the topper on a bad week. Daisy and Sage went to the same private school and hated each other while there. Sage dated Jordan for several years, but when he proposed she turned him down and then left for Europe. He later pursued and married Daisy, adding another layer of dislike between the two women.

Daisy is contacted by her father about Cassidy, who she learns was in a bad accident that left her with a broken arm and leg. Their father wants Daisy to let Cassidy recuperate in Daisy’s home because she lives in a mansion. Daisy reluctantly agrees, knowing that she will eventually have to reveal that Jordan has moved out. Her father also requests that she contact Sage about Cassidy. Once Cassidy is ensconced in her home, there are tense interactions between the two. Daisy never really knew her half-sister, who is closer to Sage. Slowly, their relationship begins to thaw. Meanwhile, Sage pays visits, where Daisy begins to see another side of her former stepsister. How will Sage react when she learns Daisy and Jordan have separated?

THE STEPSISTERS is an intriguing and complicated tale of three women connected to the past. Daisy’s mother died when she was young, so when her father married Sage’s mother, Joanne, she thought she was getting a new mother. Alas, Joanne is a vain, unloving woman who spurned her stepdaughter and blamed her marital issues on Daisy, creating friction between the girls. Sage thought Daisy was a spoiled rich girl, while Daisy thought Sage was an uppity brat. Add into the mix Cassidy, who was told after the divorce that it was Daisy’s fault that Joanne’s marriage to their father failed, then it’s no wonder things are bad between them all.

Throughout the course of THE STEPSISTERS, the three women slowly build a friendship, one that has them growing closer. Meanwhile, Daisy is trying to save her marriage to Jordan, and Sage is reconnecting with an old school friend, Adam. She enjoys being around Adam, and their relationship soon turns into more than a friendship. Cassidy is dealing with the fallout of her accident, namely because it happened during a marriage proposal and her rejection of it. Her boyfriend still loves her, but Cassidy is refusing to see him. Will she realize that she made a mistake?

THE STEPSISTERS is an enjoyable and emotional page turner that will pull readers into the story of the three women. Will something happen that rips them apart, or will it all be cookies and cream as they live happily-ever-after? Find out the riveting answer by grabbing a copy of THE STEPSISTERS.

penney said…
I can't wait to read this love her books
Penney
8:52 AM