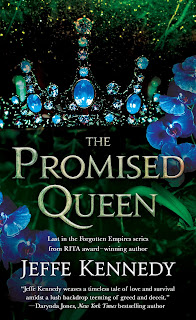 In The Promised Queen, the thrilling finale to Jeffe Kennedy's Forgotten Empires trilogy, the fate of the world hangs in the balance as Con, Lia, and their allies sacrifice everything in a final bid to destroy the corrupt empire.Claim the hand that wears the ring, and the empire falls.
Conrí, former Crown Prince of Oriel, claimed the hand that wears the Abiding Ring, but the prophecy remains unfulfilled. Queen Euthalia of Calanthe returned to her island kingdom, but broken in mind and body. With the blood of war unleashing ancient terrors, Calanthe isn’t the haven it once was.Lia must use her magical bond with Calanthe to save their people while Con fights to hold off the vengeful Emperor Anure and his wizards. Con and Lia will have to trust in each other—and in love—to fend off ultimate disaster.

The dreamthink grabbed me by the throat and roared into my mind with brutal force, nightmares blending with the tumult of reality. They were one and the same: full of death and chaos.

The wolf fighting its chains, howling in hoarse rage, shedding fire and ash. The sea churning, bloodred and crimson dark, bones tossed in the waves, white as foam. Cliffs, towers, and villages collapsing into piles of rubble. Entire islands falling into the sea. Rain poured, mudslides following after. Cracks opened in the ground, people and animals alike shrieking as they fell, calling for me to save them. I reached out, but I had no hands—only bleeding stumps at my wrists. A whirlpool roared beneath, swirling and drinking up the blood, crying for more and more and more . . .

I woke with a choked gasp, a storm raging outside, pain racking my body inside. Hunger in both. Calanthe’s hunger, demanding and full of frightened rage, my own body echoing that craving, even as I cowered before the strident volume of Her demands.

“Lia?” Con murmured my name sleepily. He was draped heavily on and around me, his body tensing as he came awake, hands running over me as if checking for injury. “What’s wrong?”

“Right.” He rolled over, broad shoulders flexing in the dim light as he reached for something on the bedside table. “You’re supposed to drink this,” he said, showing me a glass vial. “Do you need help sitting up?”

“Don’t be ridiculous.” I pushed myself up on one elbow, somewhat astonished when it gave beneath me, dumping me ignominiously onto the pillow. How had I come to this? I was so confused, and the grinding hunger made it hard to think. There were things—important things—that I should be remembering.

“Let me,” Con said, sliding an arm beneath me and easily lifting me to lie against his chest. He uncorked the vial with his thumb and held it to my lips.

I looked and saw my hand swathed in a filmy bandage, the spindly green twigs of my growing fingers spidering against the cloth. “My hand . . .” The bleeding stumps. That hadn’t been the nightmare?

“Your hand is growing back, yes,” Con replied firmly.

“What happened to . . .” I recoiled from the rush of remembered terror.

“Shh, Lia. Don’t think about it. Drink this and you’ll feel better.” He held the cool vial against my lips and I drank, more from lack of will to resist than anything else. The liquid tasted like sunshine on green leaves, and my stomach leapt with gladness. I seized the vial from Con with the hand I still had and drained it, tipping my head to get every drop.

The din of Calanthe’s need receded somewhat. Where was I?

My own bedchamber, but the windows had been boarded up, a storm lashing rain to leak around the edges. Calanthe prowled along my nerves, howling of Her starvation, snarling and struggling to break free, the land shedding from Her back like dirt off a dog. The elixir, at least, had sated some of my body’s insane hunger, but Hers raged on. “What was this?” I asked, holding up the vial.

“Something Ambrose came up with. He said it would help—did it? You seem better.”

He said that cautiously enough that I turned to look at him. A bit of blood dribbled into his beard from his swollen lower lip. It looked like it had been chewed. “What happened to your lip?”

He fingered the wound thoughtfully. “An accident.”

He was lying, I could tell, but I couldn’t remember the truth. “Why do I feel all wrong?”

Con’s face creased with emotion, and he seemed to be struggling for words. Pushing himself up, he shoved a hand through his hair. “There’s time enough to explain—”

“What requires explanation? Am I sick?”

“Not exactly.” He sounded strangled, gesturing to my hand. “You were injured.”

I tried to think back, dredging up memories that felt thin, ragged, stagnant. All finishing with that horrible feeling of my life draining away, the blackness overtaking me. “And I was unconscious.”

He blew out a short breath, looking away. “Yes.”

Another lie. “Don’t coddle Me. Tell Me the truth.”

Swallowing hard, Con pressed a hand over his face. “You were dead, Lia. That’s why you feel wrong. But you’re getting better.”

I stared at him, uncomprehending. “Actually dead,” I clarified. “You saw My corpse?”

He dropped his hand, curling it on the sheet, and met my gaze levelly. “I did. I carried your—you—out of Yekpehr, so I can verify.”

“If I was dead, why am I alive now?” If I was alive. Maybe the dead had nightmares of being alive.

“I don’t even know. Ambrose did something, but your own magic had something to do with it, too. I’d say ask Ambrose but we both know he won’t give a straight answer.”

His smile faded, unreturned, as I struggled to pull the memories together. My mind felt spongy, eroded at the edges. I pressed a finger to the stabbing pain in my head, ruthlessly suppressing the scream that wanted to well up from the black terror of those memories.

From The Promised Queen by Jeffe Kennedy. Copyright © 2021 by the author and reprinted by permission of St. Martin’s Publishing Group.