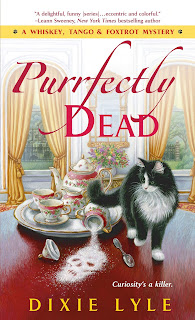 Deidre “Foxtrot” Lancaster is back―with her supernatural sidekicks Tango and Whiskey―to unlock the mysteries of life, death…and murder...in Dixie Lyle's Purrfectly Dead.When zillionairess Zelda Zoransky throws a party, she means business. Assistant extraordinaire, Deidre “Foxtrot” Lancaster knows she’s in for a night when anything can―and will―happen. The evening’s festivities include a high-stakes game between two escape artists locked in a bitter rivalry.PURRFECTLY DEADThe magic turns tragic when one of the escape artists ends up dead. This is no disappearing act―it’s murder. The suspects include a scientist with a 3D printer, a psychedelically-impaired rock star, and a serpent-tongued ghost with ties to the Garden of Eden. Now it’s up to Foxtrot, Tango, and Whiskey to figure out which guest committed the crime before they reach they end of this deadly game of Clue. How will this tail end?“A clever new series that deftly blends cozy mystery with the paranormal…original and witty.”―Ali Brandon, author of the Black Cat Bookshop mysteries.
A little bit different book!
If you're interested in winning a copy, post a comment.
Open to US mailing addresses only.
at May 08, 2021

This is my kind of book! I love cozies with a paranormal twist! I've never heard of her or her books but she is on the wish list. Going to check out her books now. Thanks for all the great authors and books you introduce us to. Have a great rest of the weekend.

Sounds interesting. Thanks for the chance.