Promo: My Ride or Die by Leslie Cohen 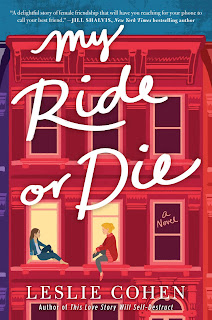 1.  Tell us about your latest release, MY RIDE OR DIE.

I loved the idea of taking the usual romantic comedy and flipping the script, which in this case meant taking the friendships, which are usually ancillary to the main story, and giving them center stage. My Ride or Die is a novel about two friends who decide to give up their search for the perfect man and build a (platonic) life together. They will still need men, of course, for fun and sex, but they plan to give the men a more secondary role. They fix up a dilapidated brownstone in upper Manhattan, and to their great delight— it actually works. They have love and emotional support and a home to call their own. However, when one of the men becomes something more than just a crush, their arrangement comes into question and they have to decide how far they’re willing to go for the life they’ve created.

2.  Without giving away any spoilers, give us a hint about a favorite scene.

I have a few and they are the more ridiculous, humorous scenes. There is one moment, in particular, when Sophie makes a desperate call to Amanda from the woods that still makes me laugh when I read it. You know a scene is good when you’re laughing at your own jokes, which you’ve read forty thousand times.

3. What inspired you to become a writer?

Probably all of the books that I read as a child and teenager. Everything from The Boxcar Children to A Tree Grows in Brooklyn to Goosebumps! Then, as I got older, there was Marjorie Morningstar, The Great Gatsby, The Good Earth, and Goodbye Columbus. There are sentences in those books that still kill me. But also, I would have to say— Sex and the City. I watched that show over and over again in college and it really influenced me, not because Carrie was a writer and I wanted her life, but because she had such a voice and it inspired me to find my own voice.

4. What is a typical writing day for you like?

Wake up and write down all of the crazy ideas I had throughout the night. Dreams can be very helpful! Then write manically and without much direction until noon, with frequent rounds of breakfast in between. I’m less productive in the afternoon but I like to sit at my computer anyway, and hope for the best.

5. If you weren’t a writer, what would you be doing?

Ideally I’d be a professional athlete. I was a ranked tournament tennis player from ages ten to eighteen. I’m pretty competitive and listened to an absurd amount of Jock Jams as a kid.

6. Do you have any interesting writing quirks or habits?

If I have to write a sex scene, which I do, pretty often, I’ll write it really quickly and then never look at it again. Every other word and punctuation mark in my novels is painstakingly edited, but the sex scenes I’ll never read more than once because I am apparently not equipped to handle them, maturity-wise.

7. What has been one of the most surprising things you’ve learned as a published author?

You can’t control all aspects of the book. It’s yours, in some ways, but it’s also a collaboration. And when other people are involved, you have to listen and that comes with its ups and downs. Also, there is a crazy amount of waiting. Waiting to hear back from people, waiting to see the cover, waiting for reviews, waiting for the actual book to arrive, etc etc etc. I’m not the most patient person, so this is a constant struggle. But I’ve learned to be better at this by always turning to the next project and keeping myself busy with work.

8. What authors or friends influenced you in helping you become a writer?

I was in the undergraduate creative writing program at Columbia and had one teacher in particular who told me that I could become a writer. I remember asking her why, because obviously I needed more information! And all she said was: “voice.” But that was a big turning point for me. I went to law school anyway, just to complicate things.

9. Do you have any favorite authors that you like to read?

Philip Roth, Jonathan Tropper, David Nicholls, Amor Towles, Sally Rooney, Lily King… But honestly, for me it’s not so much about authors as it is about individual books. I usually only like one or two books by one person. I’m the same way about music. I don’t like every song by one artist, but rather to pick and choose. I'm all about variety.

10. What other hobbies or interests do you have?

I’m an avid watcher of hockey and tennis. Sure, reading is great, but at the end of a long day, there is nothing quite like watching two Russian men whose names you can’t pronounce clobber each other.

11. Can you tell us about what’s coming up next after this for you writing wise?

12. How can readers connect with you online? 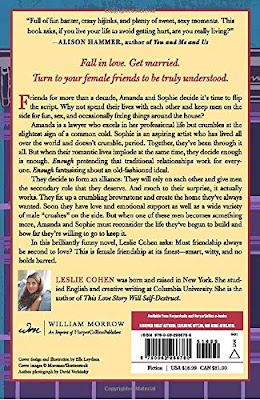