Book Giveaway: A Cowboy Kind of Love by Donna Grant 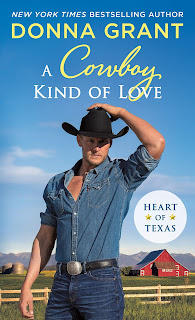 A dashing cowboy gets his second chance at romance in A Cowboy Kind Of Love, the next book in the Heart of Texas series by New York Times bestselling author Donna Grant.Who wants to rodeo again?Jace Wilder has been rebuilding his life since the love of his life, Taryn, up and left town unexpectedly. But when she mysteriously returns, Jace’s dependable world comes crashing down. Taryn is hiding a dangerous secret, and no matter how hard he tries, Jace can’t stay away―especially when Taryn is at risk. And especially when the attraction he thought he’d buried long ago is back and hotter than ever. Will he be able to trust Taryn again?Taryn Hillman’s world fell apart one horrifying night, and it’s never been the same since. When she sees a small chance at untangling herself, she takes it, though it means returning to Clearview―and seeing Jace again. But when he vows to protect her, will Taryn take a chance, and this time, never let him go?

Would love to win a copy.

This one sounds great! Thanks for the great giveaway. Have a great weekend.