RRT Review: Scoundrel of My Heart by Lorraine Heath 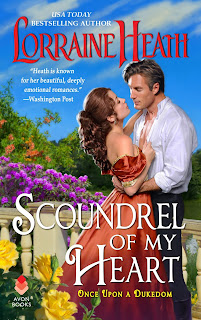 SCOUNDREL OF MY HEART - Lorraine Heath

Once Upon a Dukedom - Book 1

Lord Griffith Stanwick wakes up with a pounding headache and finds himself laying in the hedgerows behind his father's home. He hears the voices of his sister Althea and her two friends Lady Kathryn and Lady Joycelyn. He has also been a friend to Kathryn Lambert since childhood, although a teasing-provoking one. He hears her say, "Not a spare, never a spare." The words hurt. He is a spare. His brother Marcus will be the next duke in the family. It is not the first time Griffith has heard the disparagement. The young women, all about twenty-four, continue talking about the Duke of Kingsland's advertisement in the paper requesting letters from all women who might like to become his wife. He needs all eligible women to send him a letter explaining why they would be a good wife for him. His sister is engaged, she wouldn't have to write such a missive, but he knows Katherine wants a duke. Would she write a letter?

Lady Kathryn Lambert has one goal in life: to inherit the cottage her grandmother left her if she married a peer. The cottage holds her most treasured memories. She is staying with her friend Althea, and she knows why Griffith could not get in the house the previous night. She took a small reprisal against her friend's provoking brother, who often calls her by the moniker 'Freckles.' She thinks his reputation true, so believes he is like her father's younger brother--a wastrel and scoundrel. The description bothers her, but she admits to herself she enjoys their bickering. She notices at the family dinner, the duke, Griffith's father, never looks or talks to Griffith. He overlooks his 'spare' son as much as other peers do. Still, she has a favor to ask Griffith--can he discover what the Duke of Kingsland wants in a wife?

What no one else knows is Griffith has plans to escape his situation, prove himself worthy, and to make his own way…

Horrible events are about to change Griffith, Marcus, and Althea's lives. Their father, the duke, will be accused of treason and hanged. They will lose everything, their home and belongings, their noble prestige, and most of their friends. To survive they need to find work. Althea's story has already been published in BEAUTY TEMPTS THE BEAST. This story of her devilish but beguiling brother Griffith is a wonderful read and the start of a new series.

Email ThisBlogThis!Share to TwitterShare to FacebookShare to Pinterest
Labels: review;