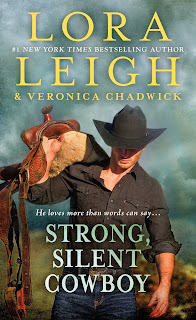 He Will Do Anything…

Sallie Hamblen had three incredibly hot, sexy nights with Jacob Donovan, an undercover CIA agent, before he disappeared, leaving her broken hearted and forever yearning for the man she lost. Years later, Jacob doesn’t know that the beauty he’s about to seduce in a small town bar is the woman he held in his arms all those years ago… and that she’s on the run from her past.

To Keep Her Safe…

Former CIA agent turned cowboy, Jacob Donovan wants nothing more than a simple life. Just the ranch and occasionally someone warm and sweet in his bed. Until Sallie comes back into his life and all of a sudden he wants to be in her bed every night...all night. When he discovers that her life is in danger, he swears he’ll protect her. Even when secrets are revealed that threaten everything between them, he will lay everything on the line to keep her in his arms.

From Strong, Silent Cowboy by Lora Leigh and Veronica Chadwick. Copyright © 2021 by the author and reprinted by permission of St. Martin’s Publishing Group.

Her mother’s advice when they had headed to Switzerland six years ago, went through Sallie’s mind as she watched the headlights cut through the dark on the empty country road. When Sallie moved to Deer Haven, Megan Dougal had smiled coolly and told Sallie to find happiness for a change. To be bold and daring and perhaps it would find her.

She released her seat belt, aware of his glance and the dark sensuality that lit his expression as she turned toward him. She moved closer.

“Start and I’ll end up fucking you on the side of the road,” he warned her, lifting his hand from the steering wheel as she moved in closer.

“No, you won’t,” she said, her voice low. “You’re renowned for your self-control under pressure. You’ll make it to the house.”

His expression hardened when she gripped his belt buckle and released it, then loosened the metal tab and zipper straining over the heavy erection beneath.

Grimacing, he glanced at her, then back to the road as she drew the straining flesh free, trepidation building inside her at the wide, steel hard flesh revealed.

The broad, mushroomed crest throbbed in her hand as she fisted it for a moment, the shaft straining as her grip slid over it, loving every single inch.

“Sallie, sweetheart, you’re playing a very dangerous game.” That warning slid through her senses. It was a challenge, a dare she wasn’t about to turn down. “You put your mouth on my dick, and you’ll find out how dangerous it can get.”

“You get my dick in that hot little mouth of yours and all bets are off, baby.” His body was tight with tension, with self-control. “So, take your chances.”

She wanted to. She wanted his flesh in her mouth again, wanted to taste him, to tease him.

Turning to him, she lowered her head between his body and the steering wheel, her tongue peeking out to taste him first.

And whatever dark hunger had gripped her in the bar surged forward with a force she was helpless against. A need she couldn’t deny herself.

He tasted like a storm and of midnight beneath her curious tongue. Clean and intoxicating. Her lips parted, spreading over the wide crest, a moan slipping past her lips as she gave herself to the twisting, shadowed needs she’d never realized were lying in wait for a moment’s weakness.

For a man as dark as the hunger that tormented her in the deepest parts of the night. A hunger he’d taught her to crave.

As the heavy crest filled her mouth, she was only dimly aware of Jacob’s hand smoothing down her back, tugging at her hip, urging her into a kneeling position. Once he had her where he wanted her, his cock moving between her lips as she knelt in the seat, his hand bunched in her skirt, tugging it to her hips.

“Fuck!” The exclamation was a rasp of dangerous desire, stroking over her senses as he pushed his hand beneath the band of her panties. “That’s good, baby. So fucking good.”

A second later she couldn’t halt her cry as her panties were torn from her, fragile lace rending and being tossed away. Her head lifted, nearly clearing the iron-hard flesh she held in her mouth.

“Don’t you dare stop,” he demanded, his hand smoothing over her rear. “Or I won’t do this.”

Broad fingers slid through the crevice of her rear to the silky glide of feminine juices coating the bare flesh below.

The stroke of his fingers between the swollen folds of flesh was incredible. Flares of heat and exquisite sensation raced over her clit, circled it, tightened it.

“That’s it, sweetheart.” He groaned. “Suck me deep and I’ll see if I can make you feel real good too.”

She hadn’t anticipated that. The way his fingers rimmed the entrance to her sex, stroked, urging more of the moisture free. His fingers played over the swollen folds, petted, slid through the thickening layer of natural lubrication, and teased around the hardened bud of her clit.

“Ah hell, your sweet mouth.” His voice was low, sensual need pulsing in the tone as she moved her mouth over the hardened flesh, her tongue licking with sensual delight as another moan slipped past her throat.

His balls were tight with the need to come, the shaft pulsing beneath her delicate hand as her mouth worked over the sensitive head. She sucked, licked, drew the crest nearly to her throat, and moaned with desperate need.

She was hungry. Hungry to touch, to be touched. He could feel the heat in her rising with each stroke of his fingers on the slick, heated folds of her pussy. Fine tremors washed through her delicate body each time his fingers neared the clenched, snug entrance and with each moment the tension building in her heightened. And so did his.

One thrust of his fingers inside the heated grip of her sex and she’d explode for him.

And it was tempting. So damned tempting.

Just to feel her shuddering, to hear her cries . . .

Perhaps if he did, the pressure on his cock would ease, he thought desperately as she sucked him like a favored treat. Her mouth was slow and easy, then hungry, suckling him deeper. She knew just where to lick, to stroke, to take him deeper than he’d imagined she’d do. She did it slowly, as though she knew exactly what he liked. Exactly how he liked it. As though she’d stepped out of his fantasies and come to life.

That thought had his cock pulsing, spilling a short, violent spurt of his release before he managed to pull her head free of him and twist the steering wheel to turn into the paved driveway of her home. He came to a hard stop at the side of the house and threw the vehicle into park.

Reaching across the seat he flipped the glove box open and pulled a condom free of the box he kept there.

There was no waiting until he could get to her bed. Still, it seemed to take forever to roll the condom over his erection.

From Strong, Silent Cowboy by Lora Leigh and Veronica Chadwick. Copyright © 2021 by the author and reprinted by permission of St. Martin’s Publishing Group.

I love cowboys this sounds good thank you
Penney