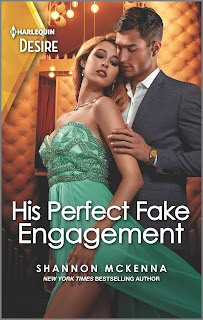 Can this bad boy keep to the terms of their fake engagement? Find out in this Men of Maddox Hill novel from New York Times bestselling author Shannon McKenna!
When it comes to bad boys,

the rules of engagement are made to be broken…

While not all of starchitect Drew Maddox’s playboy reputation is deserved, a recent scandal means he has one last shot to stay CEO of his family’s company. He has to settle down. Bright, beautiful and squeaky-clean Jenna Somers will make the perfect fake fiancée. Drew promises Jenna whatever she desires…but what she desires is him!From Harlequin Desire: Luxury, scandal, desire—welcome to the lives of the American elite.

Wealthy playboy and CEO Drew Maddox is in hot water with his company. He was recently drugged and woke up in a room with several naked women in bed with him and the pictures were sent to his uncle, who controls the company. Drew’s sister, Ava, suggests a fake engagement to her friend and coworker, Jenna Somers, to help quell the rumors that Drew is out of control. To his surprise, Jenna agrees to the ruse. Of course, being engaged means they need to go out on dates and attend parties together, so the two are soon growing close—and finding themselves attracted to each other.

Jenna first met Drew when she was in college with Ava, and she found herself attracted to him back then, but he didn’t look at her. Jenna is brainy and is behind a company that designs prosthetics. Getting the publicity of her engagement to Drew will help bring investors to her company. Jenna has heard about what happened with Drew, and he insists that he was drugged against his will and doesn’t know why it happened. Someone seems determined to take him down. Could it be his dastardly cousin, Harold, who has always competed against him?

Drew and Jenna’s engagement might be fake, but the attraction between them soon turns real in HIS PERFECT FAKE ENGAGEMENT by Shannon McKenna. For most of his adult life, Drew has skated on thin ice with his uncle because of his shenanigans. The last thing the company needs is the CEO involved in a sex scandal. Drew insists he doesn’t know what happened. One minute he was at a bar, then the next he woke up in bed with these naked women. No one believes him, of course, due to his past wild history. But this time, his uncle has put his foot down. Ava’s suggestion of a temporary fake engagement makes sense. Discovering that brainy Jenna is beautiful when she lets her hair down is a plus. Will they soon end up in bed together?

Jenna is worried that her attraction to Drew might get in the way of her goals to help her company. She’s aware that they are not really getting married, but could she end up with her heart broken by Drew? Jenna is smart, but she might be using poor judgment when it comes to the one man who makes her heart hum. People around Jenna are rooting for her and Drew—and also questioning her decision to get engaged. Ava thinks it is just a business arrangement. How will Ava feel when she learns that her brother and her best friend are lovers?

Will Drew learn who was behind the plot to try and take him down? Will Jenna get the investors that she needs for her company? A sensual romance with a hint of intrigue, don’t miss HIS PERFECT FAKE ENGAGEMENT.

penney said…
Great review I love the Desires.
Penney
11:37 AM