Cover Reveal: THE WOLF AND THE WOODSMAN by Ava Reid 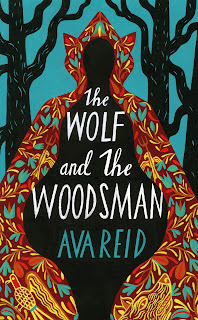 Taken from the myths and legends of her Jewish and Hungarian heritage, and weaving that with diverse cultural magic, THE WOLF AND THE WOODSMAN sets Évike and Gáspár on a dark, powerful journey that is full of tradition and yet feels entirely unique.  When soldiers arrive from the Holy Order of Woodsmen to claim a girl to sacrifice to the king, Évike is betrayed by her fellow villagers and surrendered. But when Évike and the Woodsman’s captain are attacked en route, they form a tenuous pact, forcing them both to decide whose side they are on, and what they are willing to give up for a nation that never cared for them at all. From the truly vicious magic to the sizzling heat between Évike and Gáspár, the twists and turns of this stand-alone will delight and surprise readers as they fall in love with Évike and connect with her struggles and triumphs.

Ava Reid was born in Manhattan and raised right across the Hudson River in Hoboken, but currently lives in Palo Alto, where the weather is too sunny and the people are too friendly. She has a degree in political science from Barnard College, focusing on religion and ethnonationalism. The Wolf and the Woodsman is her debut novel.

ADVANCE PRAISE FOR THE WOLF AND THE WOODSMAN

"Gorgeously written and grimly real, The Wolf and the Woodsman is both a myth and a mirror, a bloody fable about two people caught in the jaws of history. It quite literally took my breath away. It has the unsettling-but-compelling gore of Henderson's The Year of the Witching, the folkloric lilt of The Bear and the Nightingale, and the moral complexity of Seeing Like a State. I’m obsessed.”--Alix E Harrow, Hugo-award winning author of The Ten Thousand Doors of January

"THE WOLF AND THE WOODSMAN is a book that made me remember how beautiful and gut wrenching historical fantasy can be. It’s a fundamentally Jewish tale, one that gripped me from beginning to end. A riveting debut that will keep you up all night, desperately chasing the heart-pounding conclusion.”--Victoria Lee, author of The Fever King

"THE WOLF AND THE WOODSMAN, beautifully written and expertly told, is a darkly magical tale from beginning to end. I was equal parts terrified and delighted, somehow swept away and grounded in a world as beautiful as it is deadly.”--Isabel Ibañez, author of Woven in Moonlight

“Évike may be the only one in her village without ‘powers,’ but that doesn’t stop her from being an in-your-face heroine who stands up for the things she believes in and never backs down. Reid has crafted a story that is not only relevant for our times, but has timelessness about it that truly makes it shine. The Wolf and the Woodsman is not a book I will soon forget.”– Genevieve Gornichec, author of The Witch’s Heart