Teaser Tuesday: Playing for You by Aurora Paige 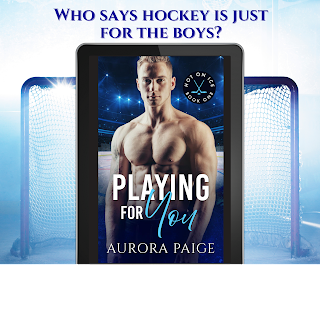 She’s a curvaceous vixen who owns the hottest lounge in Los Angeles.
He’s a sexy hockey goaltender who plays the game off the ice more than on.
What happens when a one-night stand becomes more?
Twenty-eight-year-old, voluptuous, Filipina-American, Arianna Santos has the hottest spot in LA nightlife. When her grandfather has a major stroke and there’s a low chance of recovery, she inherits from him the worst team in the National Hockey League, the San Francisco Storm. Without knowing anything about hockey or running a hockey franchise, Arianna needs to prove to the all-boys club that a well-educated, minority female owner has a place in the industry. The Storm General Manager insists that she learn about hockey from the new goalie, Blake Collins.
Tall, toned, and hazel-eyed, Blake Collins has the swift moves on the ice as the California Crusaders goaltender, continuing the Collins goalie legacy of Stanley Cup Championships his father and grandfather established for the team. When a knee injury affects his game and attitude on the ice, he gets transferred to the San Francisco Storm as their only hope of making it to play-offs. As the player with the most knowledge and skills passed from generations of great hockey players, Blake is forced to teach the new knows-nothing-about-hockey owner, Arianna Santos, about how the hockey world works.
Blake and Arianna’s animal attraction to each other gives them a passionate one-night stand in LA that doesn’t end as they expected. Will their reunion cause a riff in the organization? Will they both play nice to one another for the sake of the team?