Book Giveaway: No Holding Back by Lori Foster 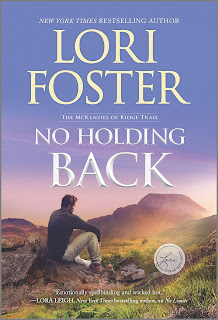 Not needing him won’t stop her from wanting him…
Trucker Sterling (Star) Parson is no stranger to the challenges a woman faces, both in her industry and in life. But she can take care of herself. She’s never needed—or wanted—a man around…until she meets Cade McKenzie. The take-charge bar owner sets off all kinds of alarm bells for Sterling, but he also sets her heart racing.Cade’s lived in Ridge Trail long enough to know trouble when he sees it, and the moment Sterling—Star—walks into his bar, he knows trouble’s come to call. Secrets run deep in the small town and Cade can tell Star’s got as many as he does, leaving him itching to uncover every last one. But finding common ground will mean trusting one another, further feeding an intense attraction that’s growing impossible to resist.
My review for RRT:

NO HOLDING BACK – Lori Foster

The McKenzies of Ridge Trail, Book 1

Sterling “Star” Parson is used to working alone in her trucking job, but also in her quest to rescue sex trafficking victims. She frequents a bar in Ridge Trail and is familiar with the bartender, Cade McKenzie. She knows he watches her a lot when she’s in there, but she dismisses it as he appears harmless, though she must admit she feels a bit of attraction. When Cade begins to ask a few questions of Sterling, she realizes that he knows what she’s up to. One night, Sterling gets lucky, which leads to an invite for her to a party at a house she suspects where there will be women lured into sex trafficking. But it all goes wrong, and she barely escapes with her life.

What Sterling doesn’t realize at first is that Cade also rescues sex traffic victims and he suspected not only where she was going, but that she’d run into trouble. Cade causes a distraction and breaks up the party, but he doesn’t know what happened to Sterling. He finally finds her and the two discover they’re both after the same thing and decide to combine forces. Cade wants to protect Sterling, while she has always been able to take care of herself.  But they prove to be a formidable team.

NO HOLDING BACK is an exciting tale set around the hunt for sex trafficking victims. Sterling isn’t a stranger to the feeling of being captured by a sex trafficker. Luckily for her, she escaped at the right time. Since then, her goal has been to take down the big bad guy behind one of the biggest sex trafficking operations in the area. But he proves hard to nail, so the added benefit of Cade helping her is a big plus. Yet, Sterling isn’t sure if she can trust Cade because he seems so mysterious. She soon learns that Cade and his whole family are in the business of rescuing sex trafficking victims. Sort of like a modern-day Batman venture with a fortress and lots of toys and gadgets. In the end, will Sterling get the man she’s tracking? How about the sizzling attraction between her and Cade? While an affair is not something she usually does, will it allow her heart to open to another person?

Cade is assisted in the “family business” by his father, brother, Reyes, and sister, Madison. They, along with their trusty butler, live in a secluded house outside of town. Using the bar and another business as fronts, the McKenzie brothers can gauge the pulse of the sex trafficking business. They have managed to operate under the radar, so the last thing they need is to have someone else “poaching” on their territory. That is why Cade convinced Sterling to join forces with them. Meanwhile, their attraction heats up, and it isn’t long before they’re having sex. Once the bad guy is caught, will their fling continue? Or will Sterling move on to another part of the country?

There’s plenty of danger and sizzling love scenes in NO HOLDING BACK, the first tale in Lori Foster’s new series, The McKenzies of Ridge Trail. Once you start reading NO HOLDING BACK, you will be unable to put it down. Excitement, passion, and a tale that ends with good winning over evil, don’t miss NO HOLDING BACK.

Lori is one of my all time favorite romance authors. I love her books because they are always so entertaining.

Oh yes, would love it; just heard about this book the other day. Thanks for the chance.

This one sounds just amazing! I don't believe I've ever read a book about sex trafficking. I would love to win a copy of this one. Lori's books are always
great.