Book Giveaway: Secret Nights With A Cowboy by Caitlin Crews 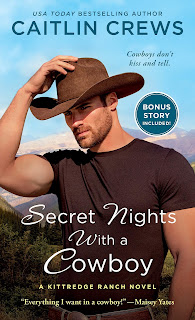 USA Today bestseller Caitlin Crews returns to Cold River, CO, and cowboys, with an emotional second chance romance in Secret Nights with a Cowboy, the stunning first installment in her new Kittredge Ranch series.A man holding on...Riley Kittredge has always known exactly what he wanted. His land, his horses. His woman. He met and married Rae Trujillo far too young, and their young love combusted right after they said their vows. But their passion has never managed to burn itself out. Yet when Rae shows this time, it's not a night of pleasure she demands, but a divorce.A woman letting go...Rae should have moved on a long time ago. She knows she and Riley just don't work. They might make great lovers, but that doesn't make a marriage. And now Rae wants a new life, complete with a baby. But when her husband offers to be a father, to give her the family she's always secretly desired, she and Riley will both have to face demons from their past―and choose love over fear at last.
Purchase a copy from Amazon: LINK
RRT's Review:

Riley Kitteridge and Rae Trujillo married just a few weeks out of high school, but their marriage fell apart after only a few short years together. Yet, they still can’t quit each other, which results in an occasional “friends with benefits” moment. But Rae feels it’s time to move on, especially since Riley won’t give her the one thing she now wants: a baby. He made it clear during their marriage that he had no plans to become a father. She approaches him one night and informs him that she wants a divorce. That seems to set something off in Riley. If he can’t have her, then he will make it difficult for her to walk away.

But while Rae still has feelings for Riley, she wants more than great sex with him. His childhood was filled with dysfunction and anger, and he believes eternal love isn’t possible. Yet, he married Rae because he wanted her—and loved her—but doesn’t want any children. Now that she’s older, the “no children” clause is a dealbreaker for her. Her maternal clock is ticking—and it’s time to move on from the man who will only cause her heartbreak.

It’s a reunion of sorts for Rae and Riley in SECRET NIGHTS WITH A COWBOY. They were in high school together and once they graduated, he couldn’t wait to get her to the altar. They agreed on many things, including no children, but they were best in bed. Yet, things began to change, and the arguments started. Eventually, Rae moved out, though they would get back together from time to time. But Rae knows it’s time to move on, even if it means turning her back on the best sex she’s ever had. Well, he is the only sex partner she’s ever had…

The moment Rae asks Riley for a divorce, something shifts inside him. It’s like cutting off a part of him and he can’t do it. The sexual vibes between them still hum deep, and even before she can get out the door, they’re kissing. Rae and Riley are soon doing the one thing they haven’t done in a long time: talk. Will their discussions lead them to find a way back together? Or is it the end of the road for their marriage?

SECRET NIGHTS WITH A COWBOY is an emotional and sensual read. The failure of their marriage isn’t something either wanted to happen, yet they could never confront the issues that drove them apart. Rae is going to have to tell Riley what led her to walk out. He is going to have to deal with the fact that he needs to like himself and change what’s wrong. It’s an interesting and emotional journey for both.

Will Rae and Riley get reunited and build a future together once more? Find out the answer in SECRET NIGHTS WITH A COWBOY.

I always make sugar cookies in different shapes with our granddaughter.

Neither one! I will probably make a couple of pies (pecan).

Don't do baking or candy making anymore. Getting too old to stand as long as it takes to do this kind of thing. Fortunately, my daughter has taken up the mantel of cookie baking. And a beautiful job she does too. Love her cooking and baking.

I get together with my daughters and granddaughter's and make different types of cookies. Merry Christmas. Happy New Year.