Promo: Love is a Rogue by Lenora Bell 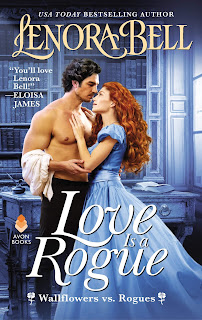 Once upon a time in Mayfair a group of wallflowers formed a secret society with goals that had absolutely nothing to do with matrimony. Their most troublesome obstacle? Rogues!

They call her Beastly Beatrice.

Wallflower Lady Beatrice Bentley longs to remain in the wilds of Cornwall to complete her etymological dictionary. Too bad her brother’s Gothic mansion is under renovation. How can she work with an annoyingly arrogant and too-handsome rogue swinging a hammer nearby?

Rogue. Scoundrel. Call him anything you like as long as you pay him.

Navy man Stamford Wright is leaving England soon and renovating Thornhill House is just a job. It’s not about the duke’s bookish sister or her fiery copper hair. Or the etymology lessons the prim-yet-alluring lady insists on giving him. Or the forbidden things he'd love to teach her.

They say never mix business with pleasure. But when Beatrice and Ford aren't arguing, they're kissing.

Sometimes temptation proves too strong to resist…even if the cost is a heart.

Sounds very good love her books thanks for the review
Penney