Promo: Looking for a Cowboy by Donna Grant 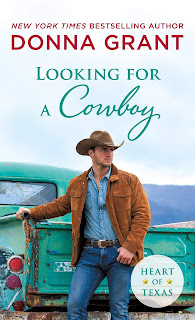 A cowboy finds love in the most unlikely place in New York Times bestseller Donna Grant's newest Heart of Texas novel, Looking for a Cowboy.

A beautiful stranger has come to Clearview, asking questions that are nobody’s business. Cooper Owens also wasn’t born yesterday. He knows that this out-of-towner is hiding a dark secret of her own. Much as he knows he should head in the other direction, he can’t make himself turn away. . .

P.I. Marlee Frampton always wanted to lead a nice quiet life, working as a cop in her local police department. But that dream came to an end when her sister was murdered—and her baby kidnapped. Now Marlee’s come to Texas to investigate the Harpers, who may be linked to shady adoption agencies. Cooper can’t believe that his friends could be involved in anything so sinister...and soon he makes it his mission to help Marlee discover the truth—and keep her safe in his arms.

From Looking for a Cowboy by Donna Grant. Copyright © 2020 by the author and reprinted by permission of St. Martin’s Publishing Group.

It never ended. Marlee had thought that after ten years, she would make some kind of dent in the never-ending— and growing—pile of cases for kidnapped babies and children. It might have begun with her sister, but it had become Marlee’s passion, the thing that consumed her.

One agency, in particular, had caught her attention. She couldn’t prove it—yet—but she knew the Family First Adoption Agency was moving children illegally. She’d done her own investigation into them, so she knew how legit they looked.

She watched the comings and goings in the small Texas town from the driver’s seat of her economy rental in a parking lot outside of the courthouse and police station. The vehicle was so small, she felt like she was in a clown car, but she had to stretch her budget. Besides, she’d gotten used to driving such vehicles a long time ago.

It felt like another lifetime when she’d tried to get as much car as she could afford—and always spent more than she should. Now, she spent her days in rentals that could be labeled kids vehicles, they were so tiny. She had stopped buying cars for herself long ago. The used Volva parked in California had been paid off for some time, and she was just fine with that setup. Because it allowed her to spend more of her money on her investigations.

Which was what had brought her to Texas.

Her client was searching for his missing newborn son. That had Marlee hunting in Texas, particularly near Dal- las since it was the closest city to the family. She had got- ten a tip and was about to disregard it when something had caught her eye about the young couple. On paper, they looked normal. All the I’s dotted and T’s crossed. For all she knew, they were everyday folks.  Yet, she’d learned the hard way that people were rarely who they appeared to be.

Brice and Naomi Harper were young and seemed in love. Marlee had been following them for two days now. Their family and friends were numerous, but that didn’t mean the couple wasn’t involved in something nefarious. People always did crazy things when children were involved. A woman desperate to have her own would do anything for a baby. Marlee had stopped hoping that the people she investigated were good and that there was no reason for her to be looking into them. But that was never the case. It wouldn’t be here, either.

She blew out a breath and reached for the cup of coffee that had gone cold. That was another thing she got used to—cold coffee. She could drink it hot, cold, and any way in between now. Gone were the days when it had to be hot in order for her to get it down. Then again, it wasn’t as if her line of work allowed for a lot of niceties.

She hadn’t had a homecooked meal in ages. She couldn’t remember the last time she had been to a gym. Or the movies. Shopping was done by necessity only— and usually then for equipment to make her job easier. She racked up loads of frequent flier miles and points at hotels. At the rate she was going, she could take a year-long vacation on some tropical island and not pay for anything.

Marlee yawned and looked at the last half of her gas station sandwich with distaste. She’d love a hot meal. Ohhh, even better, a long shower. But it would be hours before she got that. She leaned her head to the side and stretched her neck before repeating the movement on the opposite side. A knot had formed in her shoulders. If she didn’t get that seen too soon, she’d be unable to turn her head, which would make her work even harder.

She grabbed her phone and searched for local massage places. Unfortunately, she couldn’t book anything since she had no idea when she’d have any downtime. For the last thirty minutes, she’d been waiting for the Harpers to walk out of the police station. She had been shocked when they pulled into the parking lot and climbed out of the SUV before opening the passenger door and taking out the baby carrier. Marlee hadn’t gotten a glimpse of the infant within since it was swaddled against the cold, and the cover was pulled over it.

Her search for masseuses ended as she went back to reading the file on the Harpers on her tablet. Brice Harper owned half of the Rockin’ H horse ranch with his brother, Caleb. Naomi was a photographer who sold most of her work online. The couple had been married for four years and were both successful in their businesses. They were also connected to the Easts.

Marlee scrolled through the information on her tablet until she got to Clayton and Abby East. Years ago, after his parents died, Clayton had inherited the East Ranch, the largest cattle ranch in the area. He and Abby were well known in the community. They did a lot for the area, including charitable work and making large donations to various nonprofits.

Everyone related to the Harpers and Easts, or friends of the couples, looked like model citizens. That included the local sheriff, Danny Oldman. Marlee wished her view of the world hadn’t been tainted by rich people believing they could buy whatever they wanted with their money or do whatever they wanted, including having a baby cut from a mother. She wished she didn’t know how often the authorities were paid to look the other way.  Or, worse, were in on the crimes.

You can purchase a copy from Amazon here (LINK)

penney said…
This sounds very good thank you
Penney
10:30 AM