Promo: Christmas at the Island Hotel 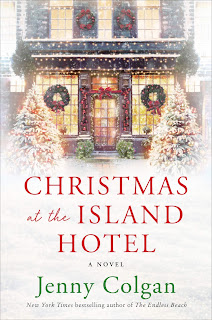 Another heartfelt and delightful Christmas tale from the beloved New York Times bestselling author of The Bookshop on the Corner and Christmas on the Island.

New York Times bestselling author Jenny Colgan returns to the setting of Christmas on the Island and Endless Beach for a heartwarming new novel celebrating the season, and Scotland.

On the tiny, beautiful, and remote island of Mure, halfway between Scotland and Norway, a new hotel opening is a big event. New mother Flora MacKenzie and her brother Fintan are working themselves half to death to get it ready in time for Christmas.

The new hotel’s impressive kitchens throw together two unlikely new friends: Isla Gregor is the hardworking young girl who has been a waitress in the island's cafe, dreaming of a bigger, better life now that she’s at a proper fancy hotel. Konstantin Pederson is working his way up in the hotel's kitchens too…but he is also, secretly, the only son of the Duke of Utsire. Konstantin has been sent to learn what it is to work hard for a living, before receiving his inheritance. Although he’s initially resentful, the place grows on him; he has never met anyone quite like Isla and her fellow Murians before.

As the island’s residents and special VIP guests gather for the hotel’s grand opening gala, Christmas is in the air. But so are more than a few small-town secrets…

The tiny island of Mure lies in the far north of Scotland's waters as close to Norway as it is to Scotland. Despite its small year-round population, Mure is self-sustaining with fresh seafood, and land to graze cattle and sheep. It's also the home of a brand new hotel, the Rock, that, maybe because of its name, is off to a rocky start.

Fintan MacKenzie technically owns the Rock, but he despises it, and would sell it in a heartbeat. However, it was left to him by his husband, Colton, who passed away not long ago. It was Colton's dream idea, and every bit of love and money that he had went into making the hotel a success. Fintan has been dragging his feet in preparing it to open, so his older sister, Flora, a new mother, is hammering away at him to fulfill Colton's dream. But it isn't Fintan's dream.

Flora has about had it with her brother. She's exhausted from being on maternity leave from managing the Summer Seaside Kitchen in the village, Living in the family farmhouse with Flora and Fintan, besides baby Douglas, is Flora's partner, Joel, Flora and Fintan's brother Innes, along with his family, including their five-year-old daughter, Agot, who until Douglas was born was the only child, and she's none too happy to have competition. So Flora's exasperation with Fintan is just one more thing she has to shoulder. The hotel is booked for Christmas, they have little staff, no chef, and an owner who seems in no rush to fix those issues.

As much as she'd rather get used to being a mother, Flora takes on organizing the hotel's Christmas plans, but sends the grieving Fintan off to Glasgow to interview chefs. In the meantime, she hires one of her cafe employees, Isla, to work at the Rock in the kitchen since she has baking experience. Joel has found someone from Norway to also work in the kitchen, hopefully under the tutelage of their new chef.

Meanwhile, in Norway, young, rich playboy Konstantin has just been kicked out of his castle home by his irate father. No more credit cards, no more parties, no phone, nothing but a suitcase and his dog as Konstantin finds himself on the next ferry to some place called Mure. And he's not to return for six months! Sullen, unaware of even the idea of doing anything for himself, Konstantin steps off the ship into a life he couldn't even imagine in his wildest dreams.

Glasgow proves to be a bust at first for Fintan, until the swaggering, multi-tattooed Frenchman, Gaspard, shows up at the employment agency. After whipping up an amazing meal in the kitchen, Fintan hires him on the spot. However, when Gaspard arrives in Mure, his Gaulish ego pretty much sets everyone on edge. Can this wild man organize a gourmet kitchen in a few short weeks with the rag-tag employees that have been hired?

If you haven't read any of Jenny Colgan's wonderful stories, do start with this one. CHRISTMAS AT THE ISLAND HOTEL is full of incredible characters, plenty of humor, some very topical issues, a bit of romance, along with the backdrop of the delightfully Scottish island - bad weather and all. Steady, caring Flora mothers everyone, but she's not a pushover. Grief-stricken Fintan is struggling just to get through each day without Colton, Isla isn't sure about the young man from Norway, and Konstantin is learning about a whole new way of life. And then there is Agot, a force to be reckoned with.

CHRISTMAS AT THE ISLAND HOTEL will start readers' holiday season off in a delightful way. We've all had a strange year and Jenny Colgan's terrific fare will cheer everyone up.

Anonymous said…
New Christmas book to me, haven't heard about it. Thanks for review.
Patoct
6:32 AM