Book Giveaway: A Princess for Christmas by Jenny Holiday 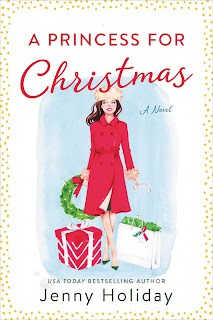 A PRINCESS FOR CHRISTMAS – Jenny Holiday

Princess Marie, future queen of Eldovia, is in New York City to give a presentation at the United Nations. Her scheduled ride breaks down, so Marie, against the advice of her two escorts, flags down a taxi. It’s kind of full—not only is there the driver, but he also has a little girl beside him, along with a dog in a cage—but she convinces him to take her to her destination.

Leo Ricci has his hands full raising his sister, Gabby, while driving a taxi to support them. Picking up Princess Marie one night, he is at first annoyed by the fare because he was headed some  place else, then intrigued by how grounded she is.  The two hit it off on friendly terms, which ends with Marie hiring him as her personal driver for the next couple of days while she’s in town—throwing in a generous monetary compensation. As Leo drives her around, they begin to connect, and leads to her inviting him and Gabby to her country for Christmas, which is in a few days. Will their friendship turn into something more in Eldovia?

A PRINCESS FOR CHRISTMAS is a cute, holiday romance that will tug at the heartstrings of readers. Marie just wants to be treated as any normal person, despite the fact that she is the future queen of a country located in Europe. As the only child of the king, she is being pressed into marrying the man her father has chosen for her—but it won’t be for love. Leo shows her a side of New York that she had never seen before, which is why she decided to reciprocate by inviting Leo and Gabby to her country for Christmas. Of course, for Gabby, it is simply amazing to be around royalty and thinks of Marie as doing no wrong. Leo senses there is turmoil deep inside Marie. Will she confide to him?

Once in Eldovia, Leo finds it a whole different experience. He meets Marie’s father and a few of her friends, and quickly settles into enjoying the visit. He also spends time with Marie, and the two soon develop feelings for each other. At first, she only suggests that they have sex, a fling that will last until Leo and Gabby return to the United States. But soon, they are both craving more than a short fling. But can there be any future between a princess and an American commoner?

A romance that is both sweet and sensual, A PRINCESS FOR CHRISTMAS by Jenny Holiday will keep you enthralled as you fall in love with Leo and Princess Marie, with the added affection for little Gabby. Don’t miss this engaging tale.

Leo Ricci's already handling all he can, between taking care of his little sister Gabby, driving a cab, and being the super of his apartment building in the Bronx. But when Gabby spots a "princess" in a gown outside of the UN trying to hail a cab, she begs her brother to stop and help. Before he knows it, he's got a real-life damsel in distress in the backseat of his car.

Princess Marie of Eldovia shouldn't be hailing a cab, or even be out and about. But after her mother’s death, her father has plunged into a devastating depression and the fate of her small Alpine country has fallen on Marie’s shoulders. She’s taken aback by the gruff but devastatingly handsome driver who shows her more kindness than she’s seen in a long time.

When Marie asks Leo to be her driver for the rest of her trip, he agrees, thinking he’ll squire a rich miss around for a while and make more money than he has in months. He doesn’t expect to like and start longing for the unpredictable Marie. And when he and Gabby end up in Eldovia for Christmas, he discovers the princess who is all wrong for him is also the woman who is his perfect match.

Nov is almost here and so is the holiday season.

Note: I have two copies: one is an arc.

I've heard fun things about this one!

I love the cover and would like to try this author.
Karen T. (Natty's Mama)