Promo: The Lost and Found Bookshop by Susan Wiggs 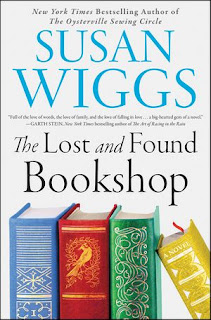 There is a book for everything . . .
Somewhere in the vast Library of the Universe, as Natalie thought of it, there was a book that embodied exactly the things she was worrying about.
In the wake of a shocking tragedy, Natalie Harper inherits her mother’s charming but financially strapped bookshop in San Francisco. She also becomes caretaker for her ailing grandfather Andrew, her only living relative—not counting her scoundrel father.
But the gruff, deeply kind Andrew has begun displaying signs of decline. Natalie thinks it’s best to move him to an assisted living facility to ensure the care he needs. To pay for it, she plans to close the bookstore and sell the derelict but valuable building on historic Perdita Street, which is in need of constant fixing. There’s only one problem–Grandpa Andrew owns the building and refuses to sell. Natalie adores her grandfather; she’ll do whatever it takes to make his final years happy. Besides, she loves the store and its books provide welcome solace for her overwhelming grief.
After she moves into the small studio apartment above the shop, Natalie carries out her grandfather’s request and hires contractor Peach Gallagher to do the necessary and ongoing repairs. His young daughter, Dorothy, also becomes a regular at the store, and she and Natalie begin reading together while Peach works.
To Natalie’s surprise, her sorrow begins to dissipate as her life becomes an unexpected journey of new connections, discoveries and revelations, from unearthing artifacts hidden in the bookshop’s walls, to discovering the truth about her family, her future, and her own heart.

Natalie Harper works for a fine wines company in California wine country. She's great at her job, and takes it very seriously, so much so, that she's a bit of a micro-manager. Yet she hates what she does, isn't fond of those in her department who work for her as she is constantly fixing their mistakes and covering for them. Today she is being promoted for a million dollar deal that she accomplished, no thanks to her bumbling employees. But it's all unimportant because obviously her mother isn't going to make the ceremony. And her boyfriend is off on a test flight for his company. Natalie is used to her mother being a no-show. There is always the excuse that her bookstore, The Lost and Found Bookshop in San Francisco, is making demands that she can't ignore.

The promotion ceremony is a short-lived, and not comfortable event after one of Natalie's employees spills wine on her before her acceptance speech. It all seems surreal, especially because of her true feelings about the job. But the day comes to a tragic ending when Natalie is informed that her mother and boyfriend have died in a plane crash. They were going to surprise her by arriving at the ceremony together.

An only child, raised by her single mother, and living over the bookshop with her mother, grandfather, and his companion, Natalie has always felt as if she was invisible. She didn't feel as if she fit in at her private school, or that the bookshop didn't always come first in her mom's life. Now, she is the sole proprietor of The Lost and Found Bookshop. With Grandy, her grandfather, living in a small apartment attached to the back of the store, and his mind going, the responsibility of caring for him as well as keeping the store functioning is mind boggling for Natalie. She discovers her mother's disastrous bookkeeping, bills overdue, and a building that is falling apart. Natalie's affection for Grandy, and her growing love for being a book store owner are helping with the grief, the confusion, and the future.

I enjoyed THE LOST AND FOUND BOOKSHOP and readers will feel the pain and confusion that Natalie must go through after her mother's death. Natalie's struggles can be frustrating at times as is her lack of confidence, and an inability to understand how her feelings affect everything in her life. She discovers something about her boyfriend that she didn't expect, and learns an awful lot about her mother from those who loved and respected her. Grandy, the store's employees, and others who come into Natalie's life make this story realistic and down-to-earth. Can Natalie let people into her life and come to grips with her new future? Will discovering her family's past explain everything to her? Don't miss this heartwarming tale.

Patoct said…
This has been on my wishlist. Thanks for the synopsis.
4:53 AM