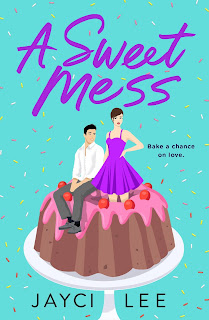 A SWEET MESS – Jayci Lee
St. Martin’s Griffin
ISBN: 978-1250621108
July 14, 2020
Romantic Comedy
California – Present Day
Aubrey Choi loves running her bakery in the small town nestled against the Sierra Mountains, and even has plans started to expand her business. One night while in a local bar, she runs into Landon Kim, who is spending the night in town. They end up having sex at his hotel, though she leaves early in the morning before he awakens. Several days later, Aubrey discovers that Landon is a restaurant critic and he’s just given her bakery a bad review—a kiss of death for any business. Never mind that the cake he bought and tried was actually a special order meant for a small child’s birthday. Her business begins to suffer, and she tries to contact Landon to explain what happened to get him to retract his story. After a couple of months, she is finally face-to-face with him and explains. But he has a no second chance policy and refuses.
Landon does believe Aubrey is telling the truth that he got the wrong cake. But he can’t change his policy because it would ruin his reputation. To help make amends, Landon offers Aubrey a job co-hosting a cooking show that will give her a nice monetary advance. She needs the money to put toward her expansion, so she accepts. However, the job requires that she travel to a town many miles away, and when she arrives, she discovers she’s living under the same roof as Landon…the man she once slept with. The attraction between them is still there. How long before they find themselves between the sheets together?
Aubrey and Landon’s relationship starts off with a hot hookup and soon morphs into a battle of wills in A SWEET MESS. They were instantly attracted to each other but felt they were like two ships passing in the night, so didn’t bother to try and continue things afterward. Landon didn’t know Aubrey owned the bakery he had stopped at and she didn’t realize—at first—that he was a restaurant critic. After his bad review of her shop hits the stands, she frantically tries to contact him through the magazine he works for, but he’s out of the country. Once they reconnect, Landon feels bad, but he’s in a tough spot with his reputation on the line. So, why not help her out in another way?
Their chemistry sizzles in A SWEET MESS, but like life, love doesn’t always go smoothly. Mistakes happen, so does love. Aubrey tries to ignore their attraction, yet it can’t be denied. Landon figures a fling while they’re working together will take the edge off the lust, but even he begins to wonder if they can continue things afterward. Minor characters who help move the plot along include Aubrey’s best friend, Tara, who is ready to give her advice whether it’s asked for or not. The cooking show is headed by Aria, who is Landon’s friend and one who is ready to tell him that he’s an idiot when he continually ignores his true feelings for Aubrey.
Readers who enjoy a cute and funny romantic tale set around cooking and baking in the lush beauty of California will surely love A SWEET MESS. The prose and pace of the story is brisk and fun, while the angst Landon and Aubrey experience are real. Don’t miss the fun in A SWEET MESS.
Patti Fischer

Excerpt from A Sweet Mess by Jayci Lee. Copyright 2020 by the author and reprinted with permission from St. Martin’s Griffin.

ABOUT A SWEET MESS:

Korean-American author Jayci Lee delights with A Sweet Mess, a delicious and light-hearted romantic comedy that readers will devour and ask for more.

Aubrey Choi loves living in her small town nestled in the foothills of California, running her highly successful bakery away from the watch of her strict Korean parents. When a cake mix-up and a harsh review threaten all of her hard work and her livelihood, she never thought the jaded food critic would turn out to be her one-night stand. And she sure as hell never thought she’d see the gorgeous Korean hunk again. But when Landon Kim waltzes into her bakery trying to clean up the mess he had a huge hand in making, Aubrey is torn between throwing and hearing him out.

When she hears his plan to help save her business, Aubrey knows that spending three weeks in California wine country working with Landon is a sure recipe for disaster. Her head is telling her to take the chance to save her bakery while her heart—and her hormones—are at war on whether to give him a second chance. And it just so happens that Landon’s meddling friends want them to spend those three weeks as close as possible...by sharing a villa.

When things start heating up, both in and out of the kitchen, Aubrey will have to make a choice—to stick it out or risk her heart.

JAYCI LEE writes poignant, sexy, and laugh-out-loud romance every free second she can scavenge and is semi-retired from her fifteen-year career as a defense litigator. She loves food, wine, and travelling, and incidentally, so do her characters. Jayci lives in sunny California with her tall-dark-and-handsome husband, two amazing boys with boundless energy, and a fluffy rescue whose cuteness is a major distraction. She is the author of A Sweet Mess.

Great review this sounds very good! Love the Sierra Mountains. I'm looking forward to reading this and a new Author for me
Penney

Thanks for the review. I love foodie related stories.

Love the sounds of this! Jayci Lee's Desires have been amazing!