Book Giveaway: How Lulu Lost Her Mind by Rachel Gibson 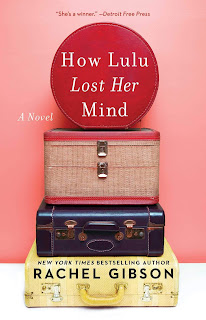 Lou Ann Hunter’s mother, Patricia, has always had a passionate nature, which explains why she’s been married and divorced five times and spooned enough male patients to be ousted from three elderly care facilities. She also has Alzheimer’s, which is why she wants to spend the rest of her life surrounded by childhood memories at Sutton Hall, her family’s decrepit plantation home in Louisiana.Lou Ann, a.k.a. Lulu the Love Guru, has built an empire preaching sex, love, and relationship advice to the women of America—mostly by defying the example her mother has set for her. But with Patricia suddenly in need of a fulltime caretaker, Lou Ann reluctantly agrees to step out of the spotlight and indulge her mother’s wishes, even if it means trading in her Louboutins and Chanel N°5 for boots and mosquito repellant.Upon her arrival at Sutton Hall, Lou Ann discovers that very little functions as it should—least of all Patricia’s mind. And as she adjusts to this new and inevitably temporary dynamic with the help of a local handyman and a live-in nurse, she is forced to confront the reality that neither her nor her mother’s future is going according to plan.Heartrending at times and laugh-out-loud funny at others, How Lulu Lost Her Mind is the book for everyone and their mother. Fans of Emily Giffin, Kristan Higgins, and Jill Shalvis won’t be able to forget it.

And the review (yes, I read it and enjoyed it)

HOW LULU LOST HER MIND – Rachel Gibson
A Perfect 10
Gallery Books
ISBN (print): 978-1-9821-1811-2
ISBN (eBook): 978-1-9821-1913-6
July 21, 2020
Contemporary Fiction
New Orleans, Louisiana – Present Day
Lou Ann Hunter has built herself a successful career preaching love, sex, and relationships—under the brand of Lulu the Love Guru. Just as she is about to fly out of Seattle on another trip to an event promoting herself, she receives a call from the Alzheimer’s facility where her mother, Patricia, is staying. Once again Patricia has violated the facility’s rules by “spooning” a patient. For the third time, Patricia is being kicked out of a facility. Unable to find one to accept her mother, Lou decides to take a temporary leave of absence from her business to tend to her. Unfortunately, Patricia wants to go to her childhood home in Louisiana, where she was left the family mansion. Aware that she doesn’t know how much longer she has with her mother, Lou moves with her and the care attendant she hired to Louisiana.
Lou feels like a fish out of water in Louisiana. The old house is likely a money pit and there’s a talking bird in residence that has a mind of its own. Building contractor Simon Broussard is there to help them get settled in. He had been contracted by the estate to make some incidental repairs. According to what Lou can see, he will need to do some more. But does she want to plunk down the money for repairs when she hopes her mother will tire of Louisiana and agree to head home or into a facility? Even with the help of the care attendant, Lindsey, Patricia is a handful. She has her good days and her bad ones, which include being mad at Lou for the silliest of reasons. They soon settle into a routine, but Lou wonders how much longer she will have with her mother before she gets worse—or dies.
HOW LULU LOST HER MIND is one of those books that you know is emotional and maybe heartbreaking, yet you will smile at the mother-daughter relationship between Lou and Patricia. Growing up wasn’t easy—especially since Patricia has a “passionate” nature that resulted in five marriages and even more “hookups”—even in her current mental state. Lou tries to adjust, but it isn’t easy, especially since she is torn between her responsibilities to her mother and her business. There are enough “blowups” by Patricia to try Lou’s patience. Then there is the mansion itself. This isn’t where Lou had envisioned herself living and she must get used to all things Cajun. And keep an eye out for pesky alligators.
Lou soon develops a friendship with Simon as he works on projects in the mansion. One wouldn’t say that HOW LULU LOST HER MIND is a romance, but there is a hint of one brewing between these two. He’s mostly—at first—a friend and soundboard. Meanwhile, Lou learns a couple of shocking things—one about her late grandfather, and another about the care attendant Lindsey. How will Lou adjust to the news? Will Patricia, who is in a fragile mental state, be told? Then there is Patricia’s health. Will Lou have enough time to be able to grow close to her mother before she has to say goodbye due to her declining cognitive functions?
I had to give HOW LULU LOST HER MIND a Perfect 10 because it is just one of those perfect reads that you get engrossed in and can’t put down. It is told from the first-person narrative of Lou, but Ms. Gibson told the story well by making readers understand what other characters are feeling. While I can’t promise a happily-ever-after, I can promise you that HOW LULU LOST HER MIND will win a place in your heart. Don’t miss this heartwarming tale.
Patti Fischer

What are you reading this hot July?
Post a comment and you'll be entered in a chance to win a print copy of this book.
Open to US mailing addresses only.
Contest ends Midnight July 31, 2020.
at July 25, 2020

On my Kindle I am reading Ghosting: A Love Story by Tash Skilton. In hardback I am reading Julia Quinn's First Comes Scandal.

I just got through reading 2 of Devney Perry's books! She is awesome. I love Rachel Gibson's books and I'm dying to read this one. Thanks for the chance to win this one.