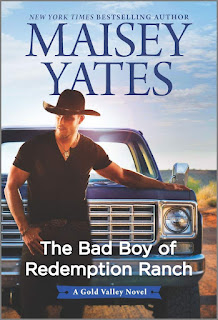 This rebel cowboy is looking for a fresh start—will he find more than he’s ever hoped for in Gold Valley?
Police officer Pansy Daniels is the poster girl for responsible behavior. Orphaned as a child, she has dedicated her life to safeguarding her local community. The last thing she needs is a hot-headed cowboy with attitude cruising into town. He may be her new landlord, but that’s no excuse for provoking her…or sending her heart into overdrive.West Caldwell has come to Redemption Ranch to put his past behind him. Flirting with a pint-size police officer who thinks he’s bad news is definitely not part of the plan, but it’s deliciously easy to get under Pansy’s skin. Then West discovers the vulnerability Pansy keeps so well hidden, and suddenly this renegade cowboy is in over his head. In her arms, West feels like the man he always wanted to be—but can he become the man Pansy deserves?

As a police officer for the town of Gold Valley, Pansy Daniels operates by the book. So, when new guy in town West Caldwell breaks the law, she writes him a ticket. Then another a couple of days later. Both times he is smart-alecky with her, yet there is a spark of sexual interest between them. Things really heat up when Pansy learns that West is her landlord. Of course, she needs a few things repaired and he’s the ever-obliging handyman. But Pansy has no time to get involved with a man because she just found out her boss is retiring, and she is applying for his job as police chief, a job her father once held. Yet, there’s no denying the attraction between Pansy and West is strong.

West grew up as the oldest son of a single mother, and it wasn’t until he was older that he learned who his father was. But it isn’t until he gets out of prison for a crime it was proven he didn’t commit, that he finally comes to Gold Valley in search of his father…and discovers he has numerous half-siblings. Liking the area, West buys Redemption Ranch, on which Pansy rents a cabin. He’s adjusting to his new life and getting to know his family, but Pansy intrigues him, especially as he recognizes that she’s only pretending to be a strong person. Deep down, she’s still affected by the death of her parents when she was a child. It’s West who reaches out and touches her heart. Will their connection lead to love?

After her parents’ death, Pansy was raised by her brother in a communal type setting. Whenever one of them needs help, she knows that she can turn to someone there, whether it be her brother, sister, or the other females there who are like sisters to her. Pansy pretends she’s tough and strong, yet deep down she feels some misplaced guilt for her parents’ death. Her no-nonsense attitude has helped her rise in standing in the police department, and she isn’t going to let her attraction to West distract her. Yet, if anyone can light the fire under her sexually, it’s West Caldwell.

Gold Valley doesn’t have much crime, so when break-ins start to happen, it perplexes Pansy. One day, she follows a lead and discovers the culprit—West’s half-brother, Emmett, a fifteen-year-old who ran away from home. Pansy finagles a deal where Emmett works off what he stole in exchange for no charges, which infuriates one of the victims—a woman who happens to be one of those in charge of hiring the new chief. Meanwhile, West takes his sibling under his roof, intent on raising him right, which is something their mother can’t do because she is too selfish.

Pansy and West’s romance is like watching a slow dance. They are clearly attracted to each other but wonder whether they deserve love and go back and forth in pursuing something between them. Pansy might have had perfect parents, but their death has deeply affected her. West’s mother was disinterested in being a parent, which made it easy to leave home when he turned eighteen. These two lost souls find each other in THE BAD BOY OF REDEMPTION RANCH. Readers will be rooting for them to get their happily-ever-after. Don’t miss this enjoyable tale.

penney said…
Great review! Her books are amazing, Thanks
Penney
10:13 AM

Patoct said…
I love her books and have a few on my tbr to get to. Thanks for the chance on this one.
4:14 AM

Anonymous said…
Thanks for the review. Sounds vg.
Karen T. (Natty's Gma)
4:42 AM