Promo: To Catch An Earl by Kate Bateman 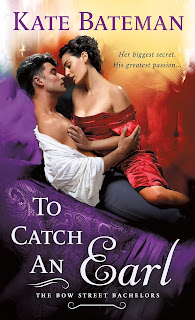 1.      Tell us about your newest release.
To Catch An Earl (Bow Street Bachelors #2) is out on June 30th. As the title suggests, it’s a nod to the fabulous crime caper romances of the 1950’s, like To Catch A Thief with Cary Grant and Grace Kelly. At its heart is a sexy cat-and-mouse game between a reluctant female jewel thief and the sexy, snarky, Bow Street Runner who turns out to be her nemesis / perfect match. There’s lots of flirty banter, ridiculous sexual tension, and a plot involving the stolen French crown jewels. I love writing ‘badasses in bodices’—clever heroines with unusual skills, (codebreakers, counterfeiters, spies) and Emmy’s no exception. To Catch An Earl is an action-adventure Regency rom-com with my favorite enemies-to-lovers trope. I hope readers will love it as much as I do!


2. What was your favorite scene in TO CATCH AN EARL?
I loved writing the British Museum heist, where our heroine Emmy not only steals a diamond, but also can’t resist taunting the hero, Alex. She deliberately leaves behind an ‘information card’ next to a big lump of rock in one of the museum display cases, renaming it after HIM, and describing its defining characteristics: “Inert. Dull in appearance. Particularly dense. No practical uses. Almost worthless.” This—naturally—provokes Alex to even greater lengths to catch the cheeky minx! I confess, I actually giggled out loud to myself when writing that scene. It’s so playful and fun!
2.      Do you have any interesting writing quirks or rituals?
I always need a hot cup of tea next to me when I’m writing. My favorite’s Yorkshire Gold, with a splash of milk and sugar. As to writing quirks, I hate the idea of actually starting a book, so I pretend I’m not writing a book at all—I’m just making a few notes, doing a little research, writing snippets of dialogue. After a few weeks, I’ll suddenly realize I’m around 20k words into a manuscript: and maybe writing a book isn’t so impossible after all . . .
4.  What authors or friends have influenced you in helping you become a writer?
I’m lucky enough to belong to a fabulous author group, Heart and Scroll, a local chapter of the national RWA (Romance Writers Of America) organization. Through that I’ve made some wonderful friends, especially fellow authors Genevieve Jack, T. M. Cromer, and Sara Whitney who have provided invaluable help, support, and feedback.
I also love reading—both of romance and other genres—and I think every book I’ve ever read has helped shaped the writer I am now, to some degree. For romance, I love to read Laura Kinsale, Loretta Chase, Judith McNaught, Anne Stuart, Kerrigan Byrne, Gaelen Foley, Eloisa James, Suzan Elizabeth Phillips, Sally Thorne, Connie Brockway, Jilly Cooper, Georgette Heyer, Jane Austen. As to general authors, I like E.M. Forster, Mary Renault, Zadie Smith, Philip Pullman, Stella Gibbons, Gabriel Garcia Marquez, and P.G. Wodehouse.

5.  What does your family think about your career as a published author?
Oddly enough, my entire career as an author of romance started because of a $1 bet with my husband. I’d just finished reading a really terrible historical romance (I can’t remember the title), and said aloud, “Ugh. I could have done better than that!” My husband glanced up and said, “Yes, but I bet you a dollar you won’t.”
Not one to turn down a challenge, I decided to prove him wrong, and sat down and wrote my first historical. That manuscript was lucky enough to win a few contests, and I subsequently received my first offer of a contract with one of the ‘big Five’ NY publishing houses. Now I’m published both traditionally and do some independent projects too, which gives great flexibility.
As to my three kids, they think it’s funny that mummy writes ‘kissing books’. My oldest, the 13 year old, recently asked if he could read one and I had to say yes – but not until you’re sixteen! I have a feeling they’re going to be mortified when they finally realize what scandalous things mummy’s characters get up to!

6.  Besides writing, what other interests do you have?
I’m a total history geek! Before I started writing romance, I spent fifteen years as a fine art & antiques appraiser in England, running my own auction house. I still have a not-so-secret double life as an occasional TV antiques expert / appraiser on several British antiques TV shows. Now I live in the USA, I get my history fix by sneaking real historical facts into my plots. I also have three inexhaustible children / monsters, and we all like mountain biking, hiking, and cooking together.

7. Can you tell us what is coming up next for you?
Bow Street Bachelors #3, The Princess & The Rogue releases December 29th 2020. It’s the story of feisty Russian Princess Anya Denisova and cynical Bow Street Agent Sebastien Wolff. Anya’s faked her own death in Paris and fled to England, (of course!) but with a dangerous traitor hot on her trail, she’s forced to accept Wolff’s offer of protection―and accommodation―at his gambling hell. But living in such close quarters, and aiding Wolff in his Bow Street cases, fans the flames of their mutual attraction. . . The weather outside might be snowy in December, but these two are hot enough to melt your Kindle!
8. How can readers connect with you online?
I love hearing from readers! To receive news and exclusive giveaways, subscribe to my monthly-ish newsletter – there’s a signup form on my website: http://kcbateman.com/
Or readers can follow me on any of the usual social media channels.
Facebook: https://www.facebook.com/kcbatemanauthor/
Twitter: http://twitter.com/katebateman
Instagram: https://www.instagram.com/kc_bateman/
And why not join my exclusive FB reader group, ‘Kate’s Badasses in Bodices’?
https://www.facebook.com/groups/490385021542157/

Alex Harland, Earl of Melton and dedicated rake, never pictured himself as an agent of inquiry. But the thrill of investigation is a challenge he now embraces. When he’s asked to pursue the Nightjar, a notorious thief who is reclaiming France’s crown jewels, the case throws him into the path of the beautiful and equally elusive Emmy Danvers, reminding him of the only puzzle he’s never solved: the identity of the mysterious woman who once stole a kiss from him—and left him wanting so much more…
The daughter of a thief, Emmy learned long ago how to keep her secrets safeguarded—and, as the notorious Nightjar, her love for Alex Harland is one of them. With the determined earl hot on her trail—and making her hot under the collar—Emmy has no choice but to keep her distance. But when a moment’s danger threatens Emmy’s life as well as her name, will Alex finally discover that he’s followed every clue…to true love?

Sounds very good thank you for the review.
Penney