With the same trademark atmospheric settings, relatable characters and cute canines that made several of her cozy mysteries #1 Amazon US and Canada bestsellers in multiple categories, Vivian Conroy pens romance as Viv Royce, creating heartthrob heroes ranging from rugged pilots to royals reluctant to believe in true love who meet their match in that girl next door or the co-worker with the business ideas exactly opposing their own – happy endings guaranteed! When not frequenting fictional worlds, Viv loves to hike (especially in the mountains), craft with paper, felt and clay, and hunt for the perfect cheesecake. Quite active on Twitter, she's the founder of #HistFicChat, a live Twitter chat about historical fiction, featuring authors like Kate Quinn, Anna Lee Huber and Susan Spann, and would love for readers to follow her and connect via @VivWrites.
Connect: Twitter | Goodreads 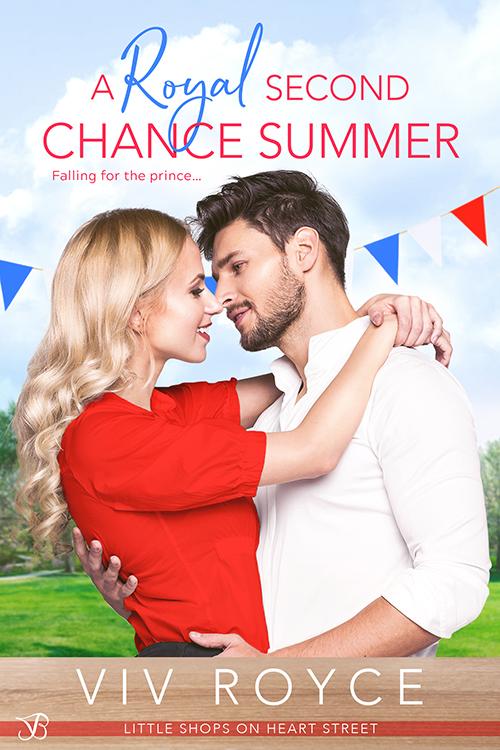 Prince Nicolas is looking for a priceless royal heirloom. Trying to stay under the radar, he keeps that he’s a prince secret—especially from the cute antiques dealer he asks to help him. The longer it takes, the more time they get to spend together, though no matter how attracted he is to Lizzie, love is certainly not an option for the heir to the crown of Belfort.
Lizzie Cates fled her family’s new-found fame and fortune because life in the spotlight wasn’t for her. She loves her small town, where the most exciting thing on the schedule is the car parade for the Fourth of July. That’s just how she likes it, until Nicolas comes along. Lizzie finds herself falling for the caring man who craves the country and small-town life as much as she does.
Except Nicolas has a secret that will shatter both their dreams...

Bill, the local deputy, who was a regular at her shop, had warned her just the other day that there had been several burglaries and thefts from cars lately, even in broad daylight. “When you’re at work somewhere, you watch out,” he had said. “And if you don’t trust the situation, give me a call. Better safe than sorry, I say.”

She shivered and checked that her phone was still in her pocket. Yes. There it was. Touching it calmed her nerves a little. It was her only connection with other people. At this remote house there was no one around to hear her if she cried out for help. No one to come to her aid.

Grant was coming over later today to help her put the bigger items, like the sideboard and a dressing table, into the van, but he wouldn’t be here for hours. Until then, she was on her own.

She took a deep breath and tried not to listen to the eerie silence of the empty house. It’s okay. Nothing happened before when I was working somewhere alone, and nothing will happen today.

She stepped out of the front door into the blinding light of a hot June day. She narrowed her eyes against the sunshine which pierced right into her brain. She had to blink a few times to see everything clearly. The bright yellow van she had rented to move the larger objects from the house sat in the driveway. A figure stood beside it.

A tall, dark-haired man in a blue shirt and jeans. He was looking at the van’s closed side door, as if wondering how to get inside. Then, with two determined strides, he moved to the passenger side and looked through the window. This sudden sight made her heart rate shoot up. What is this guy doing? Why is he here?

She clutched the statuette tighter and stared at him. Was it someone she knew?

No, his broad shoulders seemed unfamiliar to her and, when he turned his head to look at the house’s garage, his profile didn’t ring a bell either. She couldn’t heave a sigh of relief that it was an acquaintance from Wood Creek who had come over to ask if he could have first look-see at some prize pieces before she put them up for sale. This was a complete stranger.

A physically fit stranger who showed a great deal of interest in this house where she was working all alone. At that thought, he turned his head to her. Her breath caught. He had a strong face with a chiseled jaw, deep brown eyes which looked rather pensive, and a determined mouth that curved up in a hesitant smile. She had never seen such a handsome man.

But hadn’t she read somewhere that con men were often good-looking, smooth-talking guys? She should be wary. She took a step back and asked, “What do you want?”

“Good morning,” he called out, raising a hand as if to fend off the hostility edging her question. “Is this the cottage of Mrs. Landers?” He had a warm, deep voice with a light accent. Maybe French?

“Yes.” She didn’t say that Mrs. Landers had died. Maybe he didn’t know and… He could be some distant relative who was just stopping by to see her. Maybe he was looking at the van because he was surprised to find something like that in the driveway of a frail old lady who didn’t drive anymore.

Still, her uneasy feeling lingered, and nerves wriggled in her stomach. Nerves about his sudden appearance, nothing to do with his looks.

Someone who told lies for a living should be more self-assured. Didn’t they rehearse their stories in advance? And this slight hesitation made him more sympathetic. She wanted to take a step toward him and ask if she could help him. But wouldn’t that be exactly how he’d want her to respond if he couldn’t be trusted? Bill had looked so serious when he’d warned her about the recent thefts. I’d be crazy to fall for a friendly smile and lose property that isn’t mine.