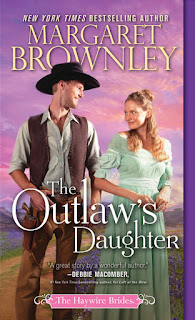 Texas Ranger Matt Taggert is on the trail of a wanted man. He has good reason to believe that Ellie-May’s late husband was involved in a stagecoach robbery, and he’s here to see justice done. But when he arrives in town, he discovers the thief has become a local hero…and his beautiful young widow isn’t too happy to see some lawman out to tarnish her family’s newly spotless reputation.

Ellie-May’s shaken by her encounter with the Ranger. Having grown up an outlaw’s daughter, she’ll do anything to keep her children safe—and if that means hardening her heart against the handsome lawman’s smiles, then so be it. Because she knows Matt isn’t about to give up his search. He’s out to redeem himself and find proof that Ellie-May’s husband wasn’t the saint everyone claims…even if it means losing the love neither expected to discover along the way.

New York Times bestselling author Margaret Brownley has penned more than forty-five novels and novellas. She's a two-time Romance Writers of American RITA® finalist and has written for a TV soap. She is also a recipient of the Romantic Times Pioneer Award. She makes her home in Southern California. Visit her online at margaret-brownley.com.