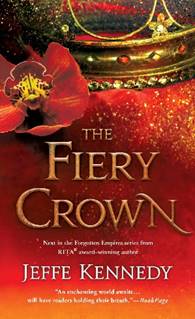 ABOUT THE FIERY CROWN:
A desperate alliance. A struggle for survival. And a marriage of convenience with an epic twist of fate WILL THEIR LOVE STAND THE TEST OF TIMEQueen Euthalia has reigned over her island kingdom of Calanthe with determination, grace, and her magical, undying orchid ring. After she defied an empire to wed Conrí, the former Crown Prince of Oriel—a man of disgraced origins with vengeance in his heart—Lia expected the wizard’s prophecy to come true: Claim the hand that wears the ring and the empire falls. But Lia’s dangerous bid to save her realm doesn’t lead to immediate victory. Instead, destiny hurls her and Conrí towards a future neither could predict…OR TEAR THEIR WHOLE WORLD APART?Con has never healed after the death of his family and destruction of his kingdom—he’s been carefully plotting his revenge against his greatest enemy, Emperor Anure, waiting for the perfect opportunity to strike. When Lia’s spies gather intelligence suggesting that Anure is planning an attack against Calanthe, Con faces an agonizing choice: Can he sacrifice Lia and all she holds dear to destroy the empire? Or does his true loyalty exist in the arms of his beguiling, passionate wife—’til death do they part?
ABOUT THE AUTHOR:
Jeffe Kennedy is an award-winning, bestselling author who writes fantasy with romantic elements and contemporary romance. She serves on the Board of Directors for SFWA as a Director at Large. Her recent works include the high fantasy trilogy from Rebel Base books, The Chronicles of Dasnaria, in the same world as her award-winning fantasy series The Twelve Kingdoms and The Uncharted Realms. She is a hybrid author, and also self-publishes a romantic fantasy series, Sorcerous Moons. Her books have won the RT Reviewers’ Choice Best Fantasy Romance of 2015, been named Best Book of June 2014, and won RWA’s prestigious RITA® Award in 2017. The The Uncharted Realms novella, The Dragons of Summer, is also a RITA finalist in 2019.She lives in Santa Fe, New Mexico, with two Maine coon cats, plentiful free-range lizards and a very handsome Doctor of Oriental Medicine.Jeffe can be found online at her website, every Sunday at the SFF Seven blog, on Facebook, on Goodreads and on Twitter. She is represented by Sarah Younger of Nancy Yost Literary Agency.

Excerpt from The Fiery Crown by Jeffe Kennedy. Copyright 2020 by the author and reprinted with permission from St. Martin’s Press.

So, since our marriage, Lia had changed the years-old routine by having Lady Ibolya assist in getting me gone before Lady Calla brought the Glory in and pretended to wake the queen all over again.
After that, the Glory helped Lia’s ladies complete the extended ritual of dressing her for the day, something I was fine with escaping. I preferred my wife—uncanny still to even think those words—without the adornments of her rank. I knew most noble ladies used their clothing and makeup as a kind of armor in their battles with the world, but Lia elevated dressing to a full-scale war. A lot of the costume and makeup served to disguise her nature. She had to shave her head, so she wore elegant wigs to hide that fact. The elaborate gowns and thick paste covered everything else.
One useful aspect of her complicated attire: Though she rarely revealed much emotion otherwise, her choice of dress absolutely announced her mood. Today she was lethal.
She wore a stiff-boned corset, which pushed up her breasts to distracting levels and narrowed her waist to a wisp I could span with my hands. The underpart of the gown exactly matched her skin tone, with an overlay of sheer material with angular black lines of gleaming black beads in spiky patterns. The skirt sleeked over her hips then flowed long and full behind her, a ruff of black at the bottom that scattered the petals as she walked. Even though there was a lot of it, the gown overall gave the impression that she was mostly naked, wearing only thin black lines of tiny beads. In fact, the more I squinted at it, the better I could see that some of the skirt was sheer, giving glimpses of her long, slim legs, made even longer-looking by the sparkling high heels on her feet.
She’d forgone her usual high collar, leaving her shoulders bare, the covering of her breasts more thickly beaded than the rest, though they hardly needed to be any more emphasized. Another ruff of lace coyly feathered over her cleavage. Even though I knew she’d have her exposed skin covered with thick makeup, the sight of her exquisite bosom tantalized me with memories of how she tasted. Gleaming black silk sheaths covered her arms from wrists to shoulders, her fingers tipped with sharp-looking nails, white with gleaming black at the ends, as if she’d dipped them in ink.
On her left hand, the orchid ring—the Abiding Ring I’d supposedly claimed along with her hand in marriage, for all the good it did me—bloomed in splendor, ruffled petals somehow sexual and magical.
The wig she’d donned to match the outfit was also ebony black—possibly the same one she’d worn for our wedding ball—but elaborately styled so that a long curl draped over one shoulder, the rest forming a coiling nest for the glittering crown of Calanthe. Lia’s makeup was all in stark black and white also. Even her lips had been painted glossy black, diamonds glittering at the corners of her mouth, at the two top points, and with a larger one centered in the full lower lip. The crown of jewels in the blues and greens of Calanthe’s gentle seas was the only point of color, besides the orchid on her hand.
Well, and the blue-gray of her eyes, a color that should have been misty but came across as crystal-shard-sharp as the beads on her gown when she assessed me from beneath diamond-tipped black lashes. Lia moved with swaying grace toward me, apparently unhurried, her expression as coolly composed as always. But I didn’t miss the tension simmering in her.
She paused a decorous distance before me, and I restrained the urge to bow. Yet another reason I’d hated court—or being with her in formal settings—was that     I didn’t know the rules for how to behave. When it was just us, man and woman, me and Lia, preferably naked, I knew how to handle her. With Her Highness Queen Euthalia . . .
“Good morning, Conrí,” she said, her smoothly cultured voice sweet as flowers. “I trust you’re enjoying My gardens? It’s a lovely day for it.”
I barely managed not to wince, or apologize— especially not for refusing to waste time in court when it would only lead to another argument between us. Instead I gave in to the urge to acknowledge her beauty by taking her hand, the one without the orchid ring, bending over it and pressing a kiss to her fingers. As always, she smelled of flowers or the inside of a leaf, as if her petal-soft skin emanated the scent naturally. She curled those nails, sharp as thorns, against my palm in subtle warning. I straightened and gave her a long, cautious look.
“Good morning, wife,” I replied, not above needling her in return. Her eyes narrowed in smoky ire. “I understand there’s news from our illustrious imperial overlord?”
That narrow gaze flicked to Ambrose and back to me. “Indeed, Conrí,” she replied with decorous boredom. “His Imperial Majesty Emperor Anure has sent Me a letter.” She lifted her free hand, flicking the black-tipped nails with languid demand, the orchid ring’s petals billowing with the movement, and her lady Ibolya set an envelope in the cage of them. The light-gray paper had been folded in intricate lines, then embossed in darker gray with an image of Anure’s citadel at Yekpehr, the rocks jagged and menacing.
She spun the envelope to extend it to me, as Sondra might flick one of her blades. Lia’s expression remained opaque, eyes guileless. “While I hate to interrupt your idyll in the garden, perhaps I could trouble you with your attention to this.”
Oh yeah, Lia was pissed as hell. I could only hope it wasn’t all aimed at me.