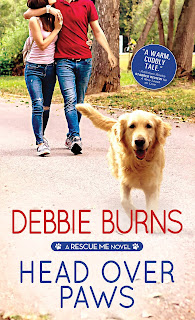 Who rescued who? Love can lead to your forever home in this charming contemporary romance from best-selling author Debbie Burns.

Olivia Graham isn't in a place to have a dog of her own, but her new position as a volunteer rescue driver for the local animal shelter will keep her close to her four-legged friends. When she's called to transport pets that have been misplaced by flooding, she doesn't hesitate to help, but then her aging car breaks down…

Veterinarian Gabe Wentworth, former EMT and firefighter, is also heading to the rescue site and reluctantly agrees to pick up Olivia on the way. After a bad breakup, Gabe's embraced the hermit life. When he meets Olivia, he can't deny their irresistible mutual attraction, and his first thought is to run the other direction. But then the two band together in a risky maneuver to save a beautiful abandoned dog from rising floodwaters. The more Gabe learns about the woman who would risk everything to save vulnerable animals, the more he realizes what he might be willing to risk…

Debbie Burns is an award-winning author and 2019 HOLT Medallion Award of Merit recipient. Her highly praised Rescue Me romance series features happily ever afters of the two and four-legged kind. She lives in Saint Louis in a gingerbread house that's almost cute enough to eat. In her free time, you can find her enjoying time with her two teens, two phenomenal rescue dogs, and a somewhat tetchy Maine Coon cat who everyone loves anyway.