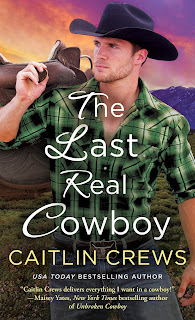 THE LAST REAL COWBOY – Caitlin Crews
Cold River Ranch, Book 3
St. Martin’s Paperbacks
ISBN: 978-1-250-0295286
January 28, 2020
Contemporary Romance
Cold River, Colorado – Present Day
Amanda Kittredge has a crush on Brady Everett, even though he never looks her way as he is best friends with her older brother Riley and she’s ten years younger. Amanda is sheltered by her family and treated as though a child, but at the age of twenty-two, she decides to move out of the family ranch home and into an apartment above a bar. The same bar where she has acquired a second job (her first is working at the local coffee espresso shop). One night, Brady comes into the bar and spots Amanda. He didn’t realize she worked there—until then—and his protectiveness comes into full display. Amanda lets him know she’s now grown up and he can’t tell her what to do. The sparks are soon flying hot between them, and suddenly it’s clear that there’s an attraction brewing.
Brady always thought of Amanda as a little sister to him, but seeing her in a lowcut top working in a roughneck bar has parts of him buzzing that shouldn’t be if she was his sister. He wants to dissuade her from working at the bar—and living above it doesn’t help—but his overprotectiveness only heightens a sexual awareness towards her that he didn’t realize was possible. One thing leads to another, and Brady is soon kissing Amanda…and wanting more. But Brady knows that if he has any illicit thoughts—or even tries to do what he’s wanting to do—then Riley will smash his face. What’s a man to do when he’s suddenly wanting to make some wickedly hot love to a beautiful woman that he can’t have?
It’s a case of forbidden love coming to fruition in THE LAST REAL COWBOY by Caitlin Crews. Amanda has been treated like a little girl, despite the fact that she is now grown up and ready to spread her wings. Her brothers didn’t want her to move out, but she put her foot down and her parents finally agreed. Brady has always been her secret love, but she thought nothing would ever happen between them after he left town at age eighteen and then built himself a career in finance in Denver. But he’s back in town because of his father’s will, which requires that he live on Cold River Ranch for a year. Brady’s relationship with his brothers, Grady and Ty, aren’t the best, and it doesn’t help that he thinks he is the one who will end up like their rascally dad. Brady figures he is not only bad husband material, but that he’s not a man a woman should fall in love with.
As the attraction between Brady and Amanda heat up, they go nose-to-nose arguing over whether she’s old enough to know if she’s ready to have sex or not. If she had her choice, Brady would be her first. While Brady doesn’t think he’s right for her, he doesn’t want another man to have that honor. Oh, the horror of what to do! Their hot chemistry sizzles right off the pages. They have a lot of inner conflicts that leave them waffling over what to do. Will Amanda finally get what she wants…Brady between the sheets? If that happens, will it be a one-night stand, or one that goes on…and on?
A sexy and fun tale, THE LAST REAL COWBOY will keep you amused and entertained right from the start. Be sure to grab a copy from wherever you purchase your books. Happy reading!
Patti Fischer

I love the review thank you, her books are real good
Penney

This one sounds awesome! Thanks for the chance to win it.