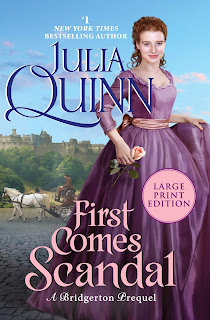 She was given two choices...
Georgiana Bridgerton isn’t against the idea of marriage. She’d just thought she’d have some say in the matter. But with her reputation hanging by a thread after she’s abducted for her dowry, Georgie is given two options: live out her life as a spinster or marry the rogue who has ruined her life.
Enter Option #3
As the fourth son of an earl, Nicholas Rokesby is prepared to chart his own course. He has a life in Edinburgh, where he’s close to completing his medical studies, and he has no time—or interest—to find a wife. But when he discovers that Georgie Bridgerton—his literal girl-next-door—is facing ruin, he knows what he must do.
A Marriage of Convenience
It might not have been the most romantic of proposals, but Nicholas never thought she’d say no. Georgie doesn’t want to be anyone’s sacrifice, and besides, they could never think of each other as anything more than childhood friends... or could they?
But as they embark upon their unorthodox courtship they discover a new twist to the age-old rhyme. First comes scandal, then comes marriage. But after that comes love...

Nicholas Rokesby is concerned when he receives a message from his father, the Earl of Manston, to quickly return to Kent. Nicholas, a medical student in Edinburgh, hurries south, wondering what could possibly be so urgent to take him from his studies? Upon arrival, his parents sit him down and practically order him to marry Georgiana Bridgerton! It seems that the loathsome Freddie Oakes kidnapped her, planned to force her into marriage in order to get her dowry, but she escaped. However, she cannot escape the scandal and only a wedding will cure that. Nicholas is close to finishing his degree and marriage is nowhere in his own plans. What is he to do?

Georgiana, Georgie to friends and family, has no intention of marrying Freddie in order to save her reputation. Her marriage plans include actually loving her husband, or at least wanting to marry him! Having life-long friend Nicholas propose, in a roundabout way, mostly angers her as she knows this wasn't his idea by his lack of enthusiasm. And then Freddie shows up in a tree outside her bedroom window!

FIRST COMES SCANDAL is another delightful Julia Quinn tale of the Bridgertons. What is so enjoyable about Quinn's books is the humor in both the dialogue and the story itself. Georgie and Nicholas have known each other forever, but neither ever thought that marriage to each other was in their future. This entertaining tale is filled with fun despite Georgie's "issue". She is a no-nonsense young woman who is well aware that her reputation is unfairly blemished, but why should she or Nicholas be forced into a wedding? Nicholas mostly wonders what he's going to do with a wife!

This comes out Tuesday and you can purchase a copy at Amazon.

How fun! Julia Quinn is always a delight!

Julia is one my favorite authors for many years now. I look forward to reading this latest book as well as her Bridgerton series coming on Netflix! Can't wait for that.

JQ is one of my favorite authors, and I have enjoyed every book she has written.