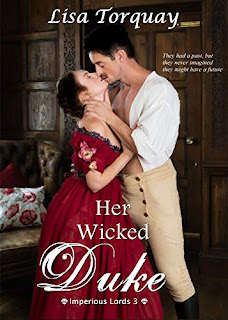 She made one mistake: him

Four years ago, Philippa met Titus in a house-party. They had a fiery tryst that ended in disaster when he married his intended--and her now deceased second cousin--Lydia. Since then, Philippa lived her sorrow in private, avoiding the man at any cost. Travelling to London, she becomes stranded in his manor, and the past is coming back to haunt her even more than it had already. Convinced she must move on, she dives in the season determined to forget him. The only problem is that the blasted duke seems equally determined that she doesn't as he follows her to the city. She'll fight him and her feelings for him standing; and get over him sooner rather than later.

He made one mistake: her

Titus, the Duke of Brunswick, succumbed to Philippa's lips that summer knowing he'd soon be betrothed to a duke's daughter. After he and Philippa part, he accepts his fate to avoid scandal. Two years ago, he lost his wife and son in childbirth and took refuge in the country ever since. But the little termagant ends up stranded in his lands, shattering his hard-won peace. The problem is that, as she leaves, she takes with her the sparks that make him feel alive. That won't do. Unbidden, he takes a trip to town and down memory lane when their kisses prove as luscious as ever. He'll kill this passion even if he dies of it.

But could two wrongs make a right?