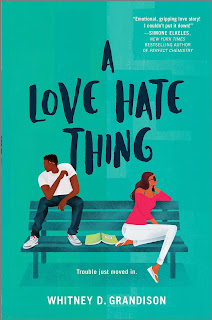 When they're stuck under one roof, the house may not be big enough for their hate...or their love.When Tyson Trice finds himself tossed into the wealthy coastal community of Pacific Hills, he's ready for the questions, the stares and the feeling of not belonging. Not that he cares. After recovering from being shot and surviving the rough streets of Lindenwood, he doesn't care about anyone or anything, much less how the rest of his life will play out.Golden girl Nandy Smith has spent most of her life building the pristine image that it takes to fit in when it comes to her hometown Pacific Hills where image is everything. After learning that her parents are taking in a troubled teen boy, Nandy fears her summer plans, as well as her reputation, will go up in flames. Now with Trice living under the same roof, the wall between their bedrooms feels as thin as the line between love and hate. Beneath the angst, their growing attraction won't be denied. Through time, Trice brings Nandy out of her shell, and Nandy attempts to melt the ice that's taken Trice's heart and being. Only, with the ever-present pull back to the Lindenwood streets, it'll be a wonder if Trice makes it through this summer at all.

So, how is everyone doing?

Post a comment and be entered in a chance to win a copy of this book. It's a hardcover YA fiction book.
Open to US mailing addresses only.
Contests

Martha Lawson said…
So far, my husband and I are doing well! Doing a lot of reading and staying in as much as possible. Hope you and your family are well, also. This sounds like a great YA book!
8:21 PM

Fedora said…
Hanging in there! Thank goodness I have a big TBR ;) Hope you're staying well!
12:15 AM