Book Giveaway: A Highlander in a Pickup 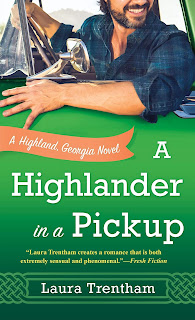 When a gorgeous new man―in a kilt―comes to town, life in Highland, Georgia will never be the same…
Iain Connors is the poster boy for the strong and silent type. Growing up a loner at Cairndow Castle in Scotland with only the cliffs and moors for company, it’s understood Iain will assume the mantle of Cairndow groundskeeper when his father is ready to relinquish it. But his stint in Her Majesty’s Armed Forces has opened up a whole new world―and now, rather than settle down, he accepts an invitation to travel to the States to take charge of the Highland Games. After all, he’s led men into battle, how hard can planning a party be?
Anna Maitland is ready to step up for her best friend Isabel Blackmoor, who can’t run the Games in their hometown this year. Surely Anna, a dance instructor with boundless energy, spirit, and charm, is up for the challenge? What she doesn’t anticipate is a man in a kilt who turns up claiming he’s the one in charge. What’s worse about this Iain? He’s so infuriatingly handsome that she can’t help but fantasize about him whispering sweet-nothings in her ear in his rumbly, sexy brogue. . .

Purchase a copy on Amazon (link)

A HIGHLANDER IN A PICKUP – Laura Trentham
A Highland, Georgia Novel, Book 2
St. Martin’s Paperbacks
ISBN: 978-1250315038
February 25, 2020
Romantic Comedy
Highland, Georgia – Present Day
Anna Maitland has been left in charge of the town’s upcoming Highland Games, which is a big task for someone who’s never done it before. Anna’s best friend, Isabel, used to do all the planning, but she’s in Scotland about to give birth to her baby. Isabel decides to send her husband Alasdair’s friend, Iain Connors, to Highland to help Anna. (You can find Isabel and Alasdair’s story in A HIGHLANDER WALKS INTO A BAR, out now) Iain arrives in Georgia wearing a kilt, which immediately has Anna wondering whether he wears anything underneath it! Will she soon find out the answer?
Iain was recently released from serving in the military and isn’t sure he’s ready for the next step in his life, which is taking over for his father, who is the caretaker of Alasdair’s uncle’s estate in Scotland. Anna at first is prickly towards him, but he can’t help but admire her hard work in preparing for the festival. Iain jumps in and starts making life easier for her, though she insists she can do things on her own. As they work together, Iain and Anna grow closer. So close, in fact, that an attraction develops. Will they indulge in a fling before he has to return to Scotland? Will the Highland Games go off without a hitch?
A HIGHLANDER IN A PICKUP is a cute, funny tale that proves that when you don’t want anything to go wrong, trouble happens. Anna wants to prove to the town that she can take over the big project of putting on the Highland Games because she is planning to run for mayor. Even as she doesn’t want to admit it at first, Iain proves helpful. It’s a big task preparing for the many vendors and people for a weekend festival. Add in that Anna is a dance teacher who is getting her students ready to perform, and she has a lot on her plate. Meanwhile, she can’t stop thinking about Iain…and his kilt.
Iain is soon enjoying his time in Highland. The people are friendly, and he can find things to do (besides helping with the Highland Games). But at the back of his mind is his decision about his future. His dad (or da, as he calls him in his Scottish dialect), is getting older and expects him to replace him at the estate. Iain can’t disappoint his dad, but what about what he wants to do? Meanwhile, Anna and Iain end up having hot sex…lots of it. Love soon enters the picture. However, she can’t move to Scotland, and he has responsibilities in Scotland. Is there any chance of a future for them?
Prepare to indulge yourself in some fun reading when you grab a copy of A HIGHLANDER IN A PICKUP. Anna and Iain will tug at your heart and you’ll be rooting for them to find happiness together.

Happy March! Name your favorite book(s) of 2020 so far.
Contest is open to US mailing addresses only.

Well, I have several 'favorites' for this year, but I'll narrow it down to 'Who Slays the Wicked?' by C. S. Harris. Love this series.

Top favorite so far is "It's Not PMS, It's You" by Rich Amooi