Here is the LINK to the promotional post that ran earlier this week. 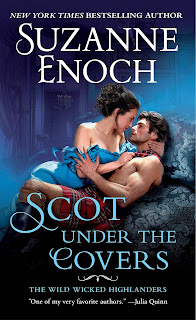 SCOT UNDER THE COVERS - Suzanne Enoch
The Wild Wicked Highlanders
St. Martin's Paperbacks
January 2020
Historical Romance
London during the Regency
Miranda Harris, lovely, charming, outspoken, and independent, despises gambling. Her uncle has fled England to hopefully find his fortune in America, leaving behind his wife and children, and embarrassing his family with his gambling problems. Plus her older brother has been known to get into trouble with his wagering and, in fact, had to sell his beloved horse to pay off a debt. So when her brother is betrothed to Eloise MacTaggert and Miranda is introduced to one of Eloise's brothers, Aden, she bristles when she discovers that he is a known gambler.
The MacTaggert brothers, Coll, Aden, and Niall have come kicking and screaming to London to fulfill an agreement their father and mother made when Francesca, their mother, left Scotland seventeen years ago. The separation of their parents was difficult for all the boys, but now, in order to save Aldriss Park, their home, they must do what their mother has dictated. And that is that each of her sons must marry an English girl before their young sister, Eloise marries, or Francesca will cut off all support to Aldriss Park. With Eloise engaged to Matthew Harris now, it is imperative for the MacTaggert men to find a Sassenach wife. Niall, the quiet one, has already complied by eloping, but Coll and Aden are having a difficult time fitting in with London society.
Aden is amused by Miranda's hostility toward him, but he soon learns that she is in hot water because of her brother's careless wagering. Matthew has become embroiled in a huge mess, owing retired Naval officer Robert Vale an enormous amount of money. It seems that Captain Vale wants to move up in society, and that means he must marry well. The agreement he and Matthew come to is that Miranda will marry Vale, and Vale will forgive the debt. If she doesn't wed him, Vale will make the story public, ruining the Harris family's reputation. Miranda confesses this to Aden, feeling that since Aden is a gambler, he will understand what to do.
SCOT UNDER THE COVERS has a unique premise, and plenty of ups and downs as Miranda and Aden, who knock heads frequently, begin to partner in finding a way to spoil Vale's plan. Aden wants Miranda, and he wants to rescue her from an evil man, but Vale has a shady past that is making it difficult for him to form a plan. Miranda soon will discover, too, that Aden is not the wild Highlander that he appears to be, but someone with a heart.
I thoroughly enjoyed SCOT UNDER THE COVERS and look forward to reading Coll's story in the future. This is a brilliant, entertaining tale.
Jani Brooks

Wow!! This sounds like a great read. I haven't read a historical with a Scot in it for awhile. I'd love to read this one - will be putting on the wish list. Thanks for the chance.

I absolutely love Suzanne Enoch's books. I've read a bunch but I still have a bunch on my TBR shelves and here I am...hoping to add another one! Can never have too many books, right?