Book Giveaway: The Love We Keep by Toni Blake 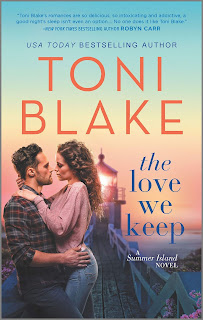 Suzanne Quinlan has been through a lot lately, so nothing sounds better than a peaceful winter in her cozy cottage on Summer Island. The last thing she wants is a massive lifestyle adjustment—especially when it comes in the form of an injured Zack Sheppard, who is sullen, angry and completely dependent on her.Zack values his independence above all else. But when he falls down his icy steps, he finds himself with a serious leg injury and in need of round-the-clock care. The only person available to help is his ex’s best friend, Suzanne. It doesn’t hurt that Suzanne is far more attractive than he ever realized, but he’s never been one to settle, and he sure isn’t going to start now.As Suzanne and Zack grow closer, they both realize they’re in this thing more deeply than they ever thought, and it’s started to cause tension in their small, close-knit community, too. Will Zack be able to commit this time, and will Suzanne be able to trust him? One thing is certain: come spring, the lives and loves of Summer Island will never be the same.

THE LOVE WE KEEP – Toni Blake
Summer Island, Book 3
HQN
ISBN: 978-1-335-00881-7
January 28, 2020
Contemporary Romance
Summer Island, Michigan – Present Day
Love has not been kind to Suzanne Quinlan. Her beloved husband died unexpectedly a few years ago, and just as she thought she’d found love again, the man of her choice fell in love with another woman—Suzanne’s best friend’s sister. As winter starts its grip on Summer Island, where the ferry stops running once the ice clogs the lake, another friend, Dahlia, sets to leave on a vacation to parts unknown. But Dahlia has barely left when her nephew, Zack Sheppard, falls down the steps from his apartment, severely injuring himself. It’s Suzanne who ends up taking care of Zack by bringing him into her home. Zack is surly and combative, but the two soon grow close. Will the closeness lead to something else…like love?
Zack is a fisherman and gone for weeks at a time. Since he can’t fish in the wintertime, he enjoys time spent on Summer Island, especially since the snow and cold means there are few inhabitants around to disturb his solitude. Zack has always been independent, and when he ends up having to rely on Suzanne for help, he feels like he’s being punished. Then, Zack receives bad news about his injury, something that could jeopardize his future. It’s Suzanne who works with him to push him to fight to overcome his injuries. As they get to know one another, he begins to see her in a different light. They have both been hurt in the past, but can they find love and happiness together?
Wintertime on Summer Island means that only the hearty locals remain as the island becomes isolated from the mainland. It’s also a time to relax during the downtime, which means most businesses are closed. Dahlia runs a small café and decided to take a vacation to some place warm. In THE LOVE WE KEEP, readers get a peek into her “vacation” and learn more about her past as she tells her traveling companion. We learn about her vagabond past—and Zack’s chaotic childhood. Suzanne thought her life had been perfect with her marriage to Cal, but then he died, throwing her into a tailspin. It has left her distrusting men for fear they’d leave her alone again. Just as Suzanne began to fall for a man on Summer Island, he fell for another woman. Now she and her best friend are estranged. Will that fractured friendship be mended in THE LOVE WE KEEP?
Suzanne has a nursing background, though her current occupation is running a flower shop. After Zack becomes injured, her nursing skills come in handy. Of course, with him being unable to walk properly, she has to help him—a lot. The intimacy only draws them closer, and leads to a mutual sexual attraction. Is it just one that is fleeting, or can it lead to a future together? Of course, the road to finding out is not easy. Zack and Suzanne are both stubborn and continually resist their attraction. But the feelings they have for each other can’t be denied.
THE LOVE WE KEEP is an emotional tale that keeps you glued to the pages. You will be rooting for Zack and Suzanne to get together. They go through the ups and downs of love, friendship, and everything in between. But, once the end comes, readers will be smiling with tears of happiness for them. Don’t miss THE LOVE WE KEEP.
Patti Fischer

Want to win a print copy of this book? Post a comment.
Contest open to US mailing addresses only and will end at midnight on Friday 2/21/20.
at February 15, 2020

I love Toni's books; thanks for the chance.

Love her books and this one sounds really good! Thanks for the chance to win.