1. Tell us about the first time you remember ever putting pen to paper. Was it a slow evolution to becoming an author, or did you have an epiphany that this is what you were supposed to be doing?

I really can’t remember when I didn’t write stories, but I got serious about writing a book when my third child was born. She had her days and nights turned around. Since I had to be up until the wee hours of the morning, I got out a notebook, sharpened some pencils and started my first novel. I was twenty-four that year. For the next twenty-five years, I collected rejection slips. I do believe I have enough to wallpaper the White House. I don’t mean that little two holer down at the end of the path in Grammie’s back yard, but the one in Washington, D.C. When I was forty-nine, I got “the call”. That was twenty-two years and one hundred books ago, and I know in my heart and soul that this is what I’m supposed to be doing.

2. Is there anyone in your family that writes? Did you have a mentor that helped you push forward to become a full-time author?

My husband, Charles C. Brown, has written nine mysteries and is working on his tenth. He's been my biggest supporter through my whole career. He’s a retired high school English teacher and he does the first edit on my books. Commas are not my friend, but they are his buddies—thank goodness.

3. How have you evolved as an author? What are some things that have changed since when you started writing up until now?

In the physical part of the business, lots has changed. I wrote most of my very first book by hand. When Mr. B bought a used typewriter at a garage sale and brought it in to me, I thought I’d died and gone to heaven. In those sent in proposals with SASE (that’s self-addressed stamped envelopes) and if the editor wanted to see more, we sent in the full manuscript by mail. Now everything is sent over cyberspace. I will be donating the typewriter Mr. B bought me to the Johnston County Chickasaw Bank Museum on November 16th. My display shares a room there with Te Ata, Gene Autry and Blake Shelton. I’m signing copies of The Family Journal there on that day from 2 to 4 p.m.

In the evolution as a writer, I hope that each book is better than the last and that all my books resonate with readers, touch their emotions and make them anxious to get the next one.

4. Do you have a set schedule for writing? Do you have any writing rituals or things that get you in the mood to write?

I’m very disciplined. I write somewhere between three and five thousand words a day. Sometimes it’s pure trash, but you can fix trash. You can’t fix nothing. From the time I start a book, my characters are in my head. They eat with me, sleep with me, talk to me…. shhhh…don’t tell anyone I hear voices!

5. Tell us about some turning points as a writer - some big things that happened that really changed your career.

One of the biggest things that changed my career was when Amazon bought the literary company, Avalon, and turned more than forty of my titles into paperbacks and digital. That made them financially available for more people, and my readership grew by leaps and bounds. Another was when I finally made the New York Times and the USA Today bestseller lists. But I have to say that hitting the number one spot on Amazon was really the icing on the cupcake.

My future will simply be to keep on doing what I’m doing, and hope my readers continue to love my stories. There are five books on the docket for 2020, and four or five novellas. And we’ve already got a few scheduled for 2021.

7. What made you want your book, The Family Journal, your hundredth book? What makes this story and these characters special to you?

Family! Plain and simple. What better way to celebrate reaching one of my goals—to publish one hundred books—than to write about family? This story is about several generations of strong women in the past, a mother who’s at her wit’s end in the present, and a young daughter who represents the future. It’s family from the emotional first scene to the last.

Lily reached for her tea at the same time Mack was setting his glass back down. Their hands touched again. Her breath caught in her chest, and her pulse jacked up several notches.

“I’m going to ask you a dumb question,” he drawled. “Do you feel chemistry between us?”

Her chest tightened. Of course she felt something between them, but she damn sure didn’t want to talk about it like they were discussing the price of goat feed. And yet . . . they were adults, not hormonal teenagers who jumped into the fire with both feet when they felt something for another person. How many times had she told her clients in therapy sessions to talk things out?

“Why is that dumb?” she asked.

“It kind of sounded dumb in my head, and even more so when I said it,” he said.

“Yes, I do feel something between us.” She nodded. “I’ve wondered if it’s because I haven’t dated all that much. How about you?”

“No dates in three years. Nothing serious since Natalie,” he admitted.

“Do you think it’s because we hav-haven’t,” she stammered.

“No, I think there’s definitely an attraction between us, and I’ll tell you right now, up front, you deserve better than me,” he said.

Lily frowned so hard that her eyes became mere slits. “Why would you say a stupid thing like that?”

“I’m a high school vo-ag teacher, and I’ll never be rich. Hell, I’m forty-one, and I don’t even own a house. I’ve just got a pickup that’s paid for and a herd of goats,” he said.

“Why, Mack Cooper, are you thinkin’ marriage?” she joked. “You haven’t even kissed me yet.”

“I’m just thinking that we shouldn’t start anything without being completely honest, and, honey, I can remedy that kissing part anytime.” His green eyes twinkled.

Lily felt heat rising to her cheeks when she thought of kissing him. How in the devil would it even work if they did decide to go out, or got into a relationship beyond friendship? They lived in the same house with Holly and Braden underfoot all the time. “I’ve got two kids,” she blurted out.

“I’ve got forty goats.” He grinned.

“Did you say it’s time to go feed the goats?” Braden came across the room and leaned his arms on the back of the sofa.

“Yep, it is,” Mack answered. “I reckon we both need to get changed so we don’t ruin our good clothes.”

“I’ll be down in five minutes.” Braden ran up the stairs.

Mack crossed the room and bent to brush a sweet kiss across her lips. The tenderness of his mouth barely touching hers and his drawl combined to send a heat flash through her whole body. If that brief contact created such an effect, a relationship might burn down the house. 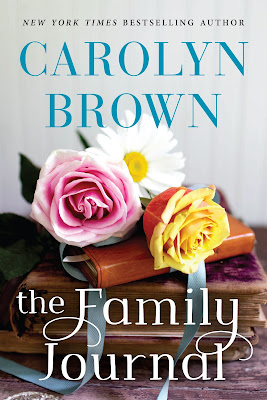 At the end of her rope, single mom Lily Anderson is determined to move her rebellious children in the right direction. That means taking away their cell phones, tablets, and computers—at least temporarily—and moving to the house where Lily grew up in the rural town of Comfort, Texas. But Lily has a bigger challenge than two sulking kids.

The house comes with Mack Cooper, high school teacher and handsome longtime renter. The arrangement: just housemates. But Mack’s devoted attention to the kids starts to warm Lily’s resistant heart. Then Lily finds an old leather-bound book in which five generations of her female ancestors shared their struggles and dreams. To Lily, it’s a bracing reminder about the importance of family . . . and love.

Now it’s time for Lily to add an adventurous new chapter to the cherished family journal—by embracing a fresh start and taking a chance on a man who could make her house a home.

Carolyn Brown is a RITA finalist and the New York Times, USA Today, Publishers Weekly, and Wall Street Journal bestselling author of one hundred books. Her genres include contemporary and historical romances, cowboy and country music romances, and women’s fiction. She and her husband live in the small town of Davis, Oklahoma, where everyone knows everyone else, knows what they are doing and when . . . and reads the local newspaper every Wednesday to see who got caught. They have three grown children and enough grandchildren to keep them young. Visit Carolyn at www.carolynbrownbooks.com.

a Rafflecopter giveaway
at November 15, 2019

So many to choose from.
The Wedding Pearls or the one about the Wedding Dress.
Patoct

I haven't read any of her books yet.