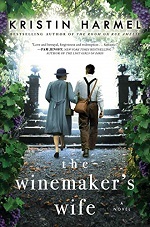 1940 - Newlywed Ines Chauveau is desperately trying to fit into her new husband's world at Maison Chauveau, his family's champagne house. She is unprepared for the time Michel spends on his vines and other work related to the growing and bottling of the precious wine. Michel's head winemaker, Theo Laurent and his wife, Celine, live on the property and are involved in the day to day work. Ines feels left out of everything since she knows so little about the business and she resents Michel's constant chiding her about everything she does. And now the Germans have invaded France, and Michel must find a way to keep his business safe. The underground caves where most of the bottles are stored have??hidden areas where he hides the most precious vintages.

2019 - Liv Kent's divorce has hit her hard. After a twelve-year marriage, she is suddenly alone and on her own. After giving up her managerial job where her husband worked in order to try in vitro fertilization, Liv now has no job, and no prospects. Thankfully, her grandmother Edith helps her financially from her home in Paris. So, it's a great surprise when Grandma Edith turns up on Liv's New York City doorstep and commands her to pack her bags, they're leaving that day for France. At ninety-nine, Edith is still a force to be reckoned with, and since Liv has no other plans, she obeys, and soon they're winging their way across the ocean.

1941 - With the Germans making outrageous demands on the vineyards, and one of the local Nazi officers making threats??towards Celine, who has a Jewish grandfather, Maison Chauveau and its residents are struggling to maintain some sense of order. Food is hard to come by, local workers are non-existent, and Michel is now working behind the scenes for the Resistance, much to Ines' frustration. It's bad enough that he neglects her for the wine, but now he's too busy hiding weapons in the maze of underground caves and attending late night meetings. The danger is real, however, and Ines sometimes doesn't grasp that.

2019 - Grandma Edith has been trying to tell Liv something, but just when Liv thinks she's going to discover what it is, the older woman shuts down. A visit to Reims, near the tiny village where Maison Chauveau is located, seems to have put Edith into a funk, and Liv can't draw anything out of her. They visit a local restaurant where Liv sees a photo of the previous owners, and she realizes that the Edouard and Edith in the picture are her grandparents. But Edith refuses to discuss it. What is she hiding? Why is it so painful for her, and how can Liv convince her grandmother to open up to her?

THE WINEMAKER'S WIFE has been compared to Kristin Hannah's THE NIGHTINGALE, and it is, to me, equally emotional and beautifully written. The horrors of what the Nazis were doing all over Europe surfaces in the tiny French village as it struggles to maintain some semblance of normalcy. The bravery of the men and women who worked in darkness to get information to the allies or to protect Jewish friends makes for some heartrending and, yes, tearful scenes. There is an amazing conclusion that readers won't expect. Historically accurate, THE WINEMAKER'S WIFE is an outstanding novel. Don't miss it.