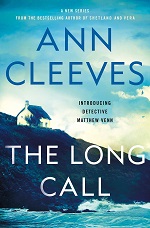 Detective Inspector Matthew Venn watched his father's funeral from a distance, knowing he'd not be welcomed by the Barum Brethren, the religious cult in which his parents belonged, and how he was raised. Discovering the "real world" when he went to college, Matthew left the restrictive Brethren, thus making him an outcast from both the cult and his family. Matthew hadn't planned on returning to his hometown, but he was transferred to the Barnstaple Police. From afar, he can hear the leader of the Brethren, Dennis Salter, droning on about Matthew's father, when he gets a call from his constable, Ross May, informing him that a body has been found on the beach near Matthew's house.

The body is that of a man , a stab wound to his chest, no identification except for a scrap of paper with his grocery list on one side and an address on the other side. There is also a tattoo of a bird on the man's neck. Detective Sergeant Jen Rafferty was there with Ross. Matthew sends them to check out the address, and Matthew goes to his house to let his husband, Jonathan, know that he would be late that night.

Jen and Ross meet one of the occupants of the address, Gaby, an artist who works for Woodyard, a day center that Jonathan manages. She informs the detectives that indeed there was a man who was living there with her and her landlady, Caroline, a social worker. His name is Simon Walden, and yes, he has a bird tattoo on his neck. Interviews with the couple living at the toll house near the beach proves less informative despite the fact that the husband, Colin Marston, is an avid bird watcher who is out on the dunes daily.
Meanwhile, in the tiny village of Lovacott, elderly Maurice worries about his daughter, Lucy. She has Down's Syndrome, and, although high functioning, her father knows she can be too trusting. Today she's come home from Woodyard on the bus, as usual, but is upset because a man who has sat with her recently and given her candy, was not on the ride today. Lucy tells him that the man tells her secrets and makes her laugh.
Matthew assigns his crew to follow up on various leads, most of which seem to be linked to Woodyard where Simon volunteered as a cook. Caroline is his landlady, and, according to Gaby, had allowed Simon to move in with them after he turned up at her work down and out. The daughter of the man who helped start and finance Woodyard, Caroline, known also as Caz, is dating the young cleric at the church nearby. Some of the people who daily attend Woodyard are, like Lucy, mentally challenged, others are students or locals learning art from Gaby, or attending counseling sessions held by Caz. Upon questioning by Matthew, most knew Simon as a cook, but no one seemed to be aware of where he came from or why he was there. He paid his rent to Caz and had worked at a nearby restaurant at one point. The investigation seemed to be going nowhere.
It isn't until a young Down's Syndrome woman disappears that Matthew and his staff begin to gather more clues, although nothing seems to make sense. They have no suspect for either the murder or the possible kidnapping.
THE LONG CALL is the first in author Ann Cleeves' new Two Rivers series. Readers will be pleased to know that as her two previous detective series, The Vera Stanhope, and Shetland books, her new detective and his environment are equally entertaining. All the characters are compelling, each with their own back story, the mystery is well developed, and the killer could be any of the people involved. The writing is so tight and beautifully scripted that it's impossible not to want to read this book in one sitting. Matthew is a man who has a poignant history, a man who has doubts in himself, and one who loves with all his heart, wondering all the time what Jonathan sees in him. I really liked Jonathan and his confidence, and how he deals with Matthew's inner turmoil.
Make sure you pre-order this book for its September publication. THE LONG CALL is excellent.