Promo: This Earl of Mine by Kate Bateman 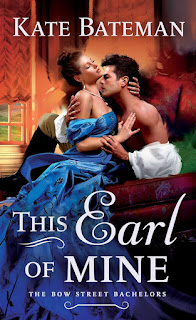 Shipping heiress Georgiana Caversteed is done with men who covet her purse more than her person. Even worse than the ton’s lecherous fortune hunters, however, is the cruel cousin determined to force Georgie into marriage. If only she could find a way to be widowed. Georgie hatches a madcap scheme to wed a condemned criminal before he’s set to be executed. All she has to do is find an eligible bachelor in prison to marry her, and she’ll be free. What could possibly go wrong?

Benedict William Henry Wylde, scapegrace second son of the late Earl of Morcott and well-known rake, is in Newgate prison undercover, working for Bow Street. Georgie doesn’t realize who he is when she marries him—and she most certainly never expects to bump into her very-much-alive, and very handsome, husband of convenience at a society gathering weeks later. Soon Wylde finds himself courting his own wife, hoping to win her heart since he already has her hand. But how can this seductive rogue convince brazen, beautiful Georgie that he wants to be together…until actual death do they part?

Georgiana Caversteed is not the typical London socialite. She has inherited her father's shipping business and is capably running it and making it even more lucrative. This does, however, make her the target of all the impoverished young bucks in London determined to get their hands on her fortune. Her own cousin, Josiah, a profligate gambler, has his sights set on forcing her into marriage with him, by hook or by crook. To settle it once and for all, and since it's frowned upon for single women to be business owners, Georgie plots a unique solution. She will find a condemned prisoner in Newgate prison, wed him, then, once he's hanged, she will claim widowhood, which makes her independent. What could go wrong?

Benedict Wylde, a veteran of Waterloo and other battles, works for Bow Street and he is undercover in Newgate to find the man who knows about a plot to free Napoleon. He is near to discovering his answer when the man he is questioning dies. A few minutes later, jailors open the door, haul him out and tell him that he and the well-dressed young woman with them is marrying him! Bemused, but unable to do otherwise, Ben agrees to the deal (£500 sent to whomever he chooses, but he must sign a contract forbidding him or his family from touching her fortune) and he and Miss Caversteed are wed. She is none the wiser as to who he is and assumes that what the jailors told her of the prisoner being sent to Australia is true. Bow Street makes sure he is freed the next morning.
Imagine Georgie's surprise to discover that her legal husband is not in Australia, but right across the ballroom at a soiree. So, he's not a criminal, he's the younger brother of an impoverished earl. And he's strikingly handsome. They meet officially, and Georgie reminds him of the contract he signed at their wedding. Ben assures her that he is honorable even though he secretly wants to woo her. Georgie is stunned by her own feelings for this rogue of a husband, and they come to a tentative truce.

Readers will love this first book in The Bow Street Bachelors series. THIS EARL OF MINE has a unique and well thought out premise, along with realistic characters. I especially enjoyed the humor, particularly the banter between Georgie and Ben as they get to know each other. A dark presence lurks in the background, and Ben's work with Bow Street plays out in an exciting event along the Thames.

Start your autumn off with a delightful tale. THIS EARL OF MINE is fun and entertaining.

penney said…
I loved the review thank you
Penney
8:27 AM