Book Giveaway: Wrapped Up In You by Jill Shalvis

Want to win a print copy of this book? Post a comment. What October plans do you have?
(Contest is only open to US mailing addresses) 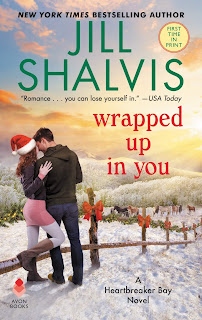 It’s love. Trust me.
After a lifetime on the move, Ivy Snow is an expert in all things temporary—schools, friends, and way too many Mr. Wrongs. Now that she owns a successful taco truck in San Francisco and an apartment to call home, Ivy’s reinvented life is on solid ground. And she’s guarded against anything that can rock it. Like the realities of a past she’s worked hard to cover up. And especially Kel O’Donnell. Too hot not to set off alarms, he screams temporary. If only his whispers weren’t so delightfully naughty and irresistible.
Kel, an Idaho sheriff and ranch owner, is on vacay, but Ivy’s a spicy reason to give his short-term plans a second thought. Best of all, she’s a tonic for his untrusting heart, burned once and still in repair. But when Ivy’s past intrudes on a perfect romance, Kel fears that everything she’s told him has been a perfect lie. Now, if only Ivy’s willing to share, Kel will fight for a true love story.

My review for Romance Reviews Today:
WRAPPED UP IN YOU – Jill Shalvis
Heartbreaker Bay series
Avon Books
ISBN: 978-0-06-289778-7
September 24, 2019
Contemporary Romance
San Francisco, California – Present Day
Kel O’Donnell, a small-town sheriff in Idaho, is visiting a friend in San Francisco for a few weeks to recover from some injuries he recently sustained. One day while out with his friend Caleb, they stop at a taco truck. The woman running this is sharp-witted and attractive—and Kel finds himself interested in her. But Ivy Snow isn’t about to let Kel into her life, which only spurs him on even more. After her taco truck is broken into, it is Kel who helps her clean up. And soon, Ivy is letting her guard down…just a little bit.
After a lifetime of running to avoid her past, Ivy is hoping she can finally settle down. She owns a business she loves, friends that provide support, and a chance to buy a condo she can call home. In the past, whenever things started looking too good for Ivy, something happened to destroy her life and she ran. Kel intrigues her, but he isn’t going to be sticking around because his life and career are in Idaho. Yet, the more she’s around Kel, the more he tempts her. Maybe a fling with him will be enough to get him out of her system and provide her a lifetime of memories. But Ivy doesn’t expect to fall for Kel.
Jill Shalvis gives readers a Christmas present with the release of WRAPPED UP IN YOU, the latest in her Heartbreaker Bay series. Ivy is fairly new to the Cow Hollow district of San Francisco, but it didn’t take her long to make friends. Of course, her friends help support her business, so it isn’t a surprise when Caleb and others show up looking for some breakfast tacos from her. Kel is among the group, and as the “new guy” he attracts her attention. There is something about him that snags Ivy’s attention. Of course, they exchange a few barbs here and there, which only heats things up between them even more. As Kel worms his way into Ivy’s life, the more she wants to keep him at an arm’s length. She has never allowed a man to get too close to her. Will she finally let down the barriers she has erected?
There is more than just his friend Caleb here in San Francisco for Kel. His sister, who recently had a baby, lives here, as does their mother. Kel hasn’t forgiven his mother for cheating on his father and walking away while he was a teenager. Will the time spent in the Bay area allow Kel and his mother to heal the rift? Meanwhile, Kel is amazed at the woman Ivy is. She is smart, tough, and sexy as hell. He wants her, yet he knows there can’t be a future for them. Or, will there be a change of plans?
WRAPPED UP IN YOU is part of the Heartbreaker Bay series but can easily be read as a standalone as this all about Ivy and Kel’s story. They make a fun couple and readers will enjoy seeing them interact because you never know what will pop out of their mouths. Heck, this is what makes reading a Jill Shalvis book so fun. You will laugh, smile, cheer on our couple, and pretty much enjoy everything about WRAPPED UP IN YOU. While it does have a Christmas title, WRAPPED UP IN YOU is a book you can read any time of the year. If you’re looking for a fun read that is sexy and highly enjoyable, then don’t miss WRAPPED UP IN YOU.
Patti Fischer
at October 12, 2019

Not much, My bday is end of the month and my daughter and her family is taking us out to eat.

I was watching the Dodgers in the playoffs, but they lost game 5 in a horrid loss, so they are out of it. Will watch a little of rest of playoffs and World Series and spend more time reading and watching my t.v. shows.

We are taking a trip through the Pennsylvania DutCh Country.

We just got back from a vacation trip to Los Cabos, Mexico with more than a dozen friends. We'll stay home and enjoy family for the rest of the month!

For October not much other than Halloween with our daughter. Next month both my daughter and my birthday - we will celebrate; my bday is on Thanksgiving this year.
Karen T. (Natty's mama)

For this month, not a whole lot! Had a mini family reunion today. Later part of the month, I will be attending a 3 day library conference that I'm really looking forward to! I would love to win this book, I love Jill's books.

My son has a birthday this week. Schedules don't permit us to celebrate on his actual birthday so it's delay until next week. Going to dinner then back to my apartment for drinks, dessert and gifts! We always have lots of fun when we get together.

Great review loved it. My husband and I just had our 33rd Annversary the 10th so that's what were doing went out for a nice dinner yesterday.
Penney

Thanks for the review of Jill's book.

Doing nothing special for October, celebrated my granddauther's 5th bday Oct. 1 and then will just be Halloween.

Thanks for the review, Patti! Love Jill's books, and this one sounds like a winner, too. No big October plans--just likely more soccer games on the calendar as we watch DS2 play with his team...