Promo: Highland Jewel by May McGoldrick 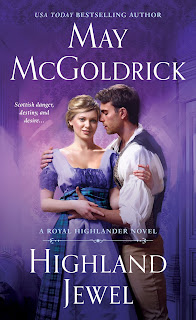 HIGHLAND JEWEL – May McGoldrick
A Royal Highlander Novel
St. Martin’s Paperbacks
ISBN: 9781250317285 (Ebook)
ISBN: 9781250317278 (Paperback)
ISBN: 9781250243195 (Audio)
September 2019
Historical Romance
Scotland – 1820
Maisie Murray maintains a different persona at home where she lives with her older half-sister, Isabella, her husband, Archibald (both physicians), and Archibald’s daughter, Morrigan. To them, she is quiet, meek, and obviously just waiting for the right man to come along and propose to her. But outside the home, Maisie is an advocate of women’s suffrage, a founding member of the Edinburgh Female Reform Society along with her friend Fiona Johnston. She comes and goes knowing her family is too busy with their own work to wonder about her travels in the city. Unfortunately, the British government isn’t pleased with the public demonstrations advocating suffrage for anyone, and after one event goes awry, Maisie is rescued by Fiona’s brother, retired soldier Niall Campbell.
Niall left the British Army after witnessing heartless and cruel issues in Ireland. He is back in Scotland looking for something other than war and killing. But soon after his return, he meets and is attracted to his sister’s friend, even though she seems bent on the same track into danger as Fiona. Maisie is, however, a refreshing interlude to his army days, and they grow closer. But when Fiona is kidnapped and her life threatened by political forces, Niall is made to promise to fulfill a secret plan that goes against everything he and Maisie stand for. There is someone in the Highlands who must be killed, or Fiona will be sacrificed.
The second book of the Royal Highlander series continues the story begun in HIGHLAND CROWN. Maisie and Niall, while from different backgrounds, are both stubborn, caring, and want what’s best for their families. But politics invades their lives in every way and only determination and loyalty will win out.
Readers will enjoy HIGHLAND JEWEL and its intrigue and romance. I highly recommend reading the first book in order to understand some of the historical aspects as well as the story of Isabella. Beautifully written, as usual, the McGoldricks are masters of history and romance.
Jani Brooks

A REBEL AT HEART
Maisie Murray’s sweet, docile exterior masks the courageous spirit of a firebrand determined to champion women’s suffrage with like-minded friends. But fighting for her principles has swept her directly into harm’s way—and into the arms of a man she cannot resist.

A WARRIOR BY BLOOD
A trained officer with the Royal Highland Regiment, Niall Campbell has spent his life serving the Crown. Battle-weary and searching for peace, he nothing to do with trouble—until he meets Maisie. But unless Niall and Maisie can find a way to stand up to the destructive forces that threaten to divide them, long-buried secrets and political schemes are destined to stand in the way of the glorious love they’ve found…

USA Today Bestselling Authors Nikoo and Jim wrote their first MAY MCGOLDRICK romance using historical figures that Jim researched while earning a PhD in sixteenth-century Scottish and English literature. Nikoo, a mechanical engineer, is a born storyteller. She is all about characters and feeling. Jim is about action and sense of place. Together, they have crafted over forty fast-paced, conflict-filled historical and contemporary novels and two works of nonfiction under the pseudonyms May McGoldrick and Jan Coffey.