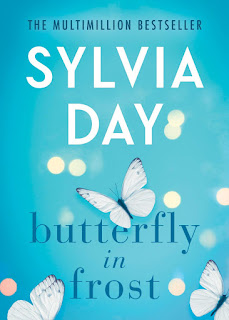 Dr. Teagan Ransom returns to Seattle after a trip to New York City to learn that a mysterious—and very sexy—man has moved next door to her. After running into him—literally—she learns that his name is Garrett Frost. He is brusque with her at first, yet there is a tingling of sexual awareness between them. Her best friend, Roxy, hints that Garrett has experienced the recent loss of a child and Teagan is sympathetic to his loss. They keep running into each other, and each time there is heightened arousal humming between them. Soon, they can’t resist the pull of the attraction and end up having sex. Once isn’t enough and their sensual connection grows deeper. But is there a chance there can be more between them than just a fling?

BUTTERFLY IN FROST is a loose spinoff from Sylvia Day’s hugely popular Crossfire series as Teagan was a minor character in that series. Teagan has her own underlying sense of grief that isn’t readily apparent to readers. That is why she understands what Garrett is going through; he lost his son in a freak accident. Garrett is big, sexy, and attractive. He oozes sex appeal that is apparent to readers. There are plenty of sex scenes for readers looking for some hot reading, but it’s only part of the story because the emotions between Garrett and Teagan run deep. It isn’t until near the end of BUTTERFLY IN FROST that readers understand why. I must admit that even I wasn’t expecting the shocking twist pulled off by Ms. Day.

The characters of Teagan and Garrett will enchant you and pull you into the story. Their emotional connection is real and makes BUTTERFLY IN FROST an intriguing page-turner. If you’re a fan of the Crossfire novels, then you get a bit of a fix, as Eva Cross appears briefly. Readers might be shocked by the plot twist in BUTTERFLY IN FROST, but in the end, they’ll be happy for the outcome. Be sure and grab a copy of this enchanting tale. 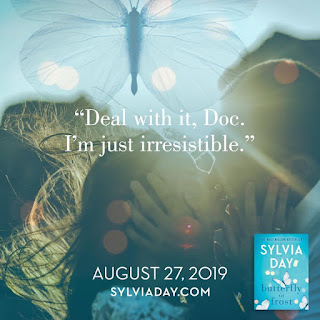 Roxy bounces on her feet with excitement. “Les and Marge sold their house.”

I blink. “I didn’t know they were selling.”

She laughs and heads toward the front door. “That’s the thing. They weren’t.”

“Wait, what?” I hurry after her as she steps outside.

I look to the right at my home, a lovingly restored butterfly-roofed midcentury, then on to the traditional house just beyond it that belongs—belonged—to Les and Marge. Including Roxy’s, all three of our homes have unique lots set between the homes that line the street and the Sound, affording us unhindered views of the water as well as exceptional privacy—all within a twenty-minute drive of the airport.

Roxy shortens the length of her stride to allow me to catch up, then glances over at me. “The day after you flew to New York, a Range Rover pulled into their driveway, and the guy inside offered them cash to close—and move out—in fourteen days.”

My step falters, and Minnie gets momentarily tangled in her leash. The dog shoots me what I would describe as an irritated look, then keeps trotting forward. “That’s crazy.”

“Isn’t it? Les wouldn’t say how much the offer was, but I’m thinking it was huge.”

We march up the inclined driveway, my head tilted back to take in the houses scaling the hillside. Designed with big windows to maximize the view, the homes have a look of wide-eyed wonder. Our little stretch of the Sound used to be a secret, but with the housing boom taking over Seattle and Tacoma, we’ve been discovered. Many residences are undergoing major renovation to suit the tastes of new owners.

Reaching the road, we turn left. To the right is a dead end.

“They’re overwhelmed. It was a lot to happen all at once, but I think they’re happy with their decision.” Roxanne stops when Bella does, and we wait as the two dogs mark one of their usual spots on the gravel edging the asphalt. There are no curbs on the streets in our neighborhood and no sidewalks. Just beautiful lawns and a profusion of flowering shrubs.

“We all tried prying information out of them,” she goes on, “but they weren’t sharing anything about the sale.” She gives me a sidelong glance. “But they did share a bit about the buyer.”

“Because Mike and I both think the buyer is someone famous. A film director maybe. Or an artist. Can you imagine? First Emily, a bestselling author. Then you, a reality-TV surgeon. Now this guy! Maybe we’re sitting on the new Malibu—beachside living without wildfires or state income tax!”

The mention of Roxy’s husband, Mike, coaxes an inner smile. A New York transplant like me, he adds a welcome touch of the life I left behind to the reality I’ve since created for myself—a reality that’s just been rocked by the loss of neighbors I like.

“What are the clues you’re working with?” I ask, deciding to play along. If I’ve learned anything the past year, it’s to accept the things I cannot change. A tough task for a control freak like me.

“Les pointed out to this guy that he hadn’t even seen the inside of the house. The guy said he didn’t need to. He knew already that ‘the light is perfect.’ I mean, who would say that? Gotta be someone who’s in visual arts, right?”

“Maybe,” I agree tentatively, disquieted by the unexpected conversation. The road rises sharply before us, the incline steep enough to put a little burn in my thighs. “Doesn’t mean he’s famous, though.”

“That’s the thing.” Her words carry a note of breathlessness. “Les wouldn’t give numbers, but he did say it was crazy the guy didn’t just buy that huge compound at the end of the street. That house is listed for three and a half million!”

My mind staggers at the thought. Les and Marge have—had—a beautiful home, but it’s not worth anywhere near that much.

“I think I saw the buyer once through that big arched window in the living room,” Roxy goes on. “The blonde with him was a looker. Supermodel skinny with legs for days.”

I’m panting when we reach the top; Roxy, who hits a gym most days of the week, is not.

A quarter mile farther, there’s a street to the right leading to Dash Point. Beyond that and straight ahead, the road slopes back down and around until it’s at water level. Redondo Beach is there, as is Salty’s, a restaurant on stilts in the water with expansive views of Poverty Bay and beyond. I’m about to wax poetic about Salty’s seafood chowder when a runner dashes around the corner at a full sprint. His sudden appearance rattles me. A closer look makes me freeze midstride. My breath locks in my lungs.

There are too many things to register at once, so my mind attempts to absorb the whole man. Dressed only in black shorts and shoes, he is a visual feast of deeply tanned skin, intricate sleeves of tattooed art, and sweat-slicked, flexing musculature.

Roxy, now a few feet in front of me, gives a low whistle. “Hot damn.” 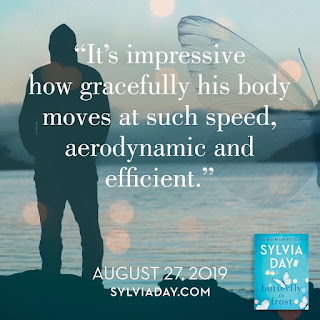 Once, I would never have imagined myself here. But I’m settled now. In a place I love, in a home I renovated, spending time with new friends I adore, and working a job that fulfills me. I am reconciling the past and laying the groundwork for the future.
Then Garrett Frost moves in next door.
He’s obstinate and too bold, a raging force of nature that disrupts the careful order of my life. I recognize the ghosts that haunt him, the torment driving him. Garrett would be risky in any form, but wounded, he’s far more dangerous. I fear I’m too fragile for the storm raging inside him, too delicate to withstand the pain that buffets him. But he’s too determined…and too tempting.
And sometimes hope soars above even the iciest desolation.
Author Biography

Sylvia Day is the #1 New York Times, #1 USA Today, #1 Sunday Times, #1 Der Spiegel, and #1 international bestselling author of over twenty award-winning novels sold in more than forty countries. She is a #1 bestselling author in twenty-eight countries, with tens of millions of copies of her books in print. Visit the author at www.sylviaday.com. 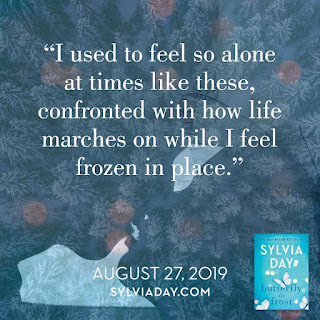 Sounds like a wonderful read. Cannot wait to do so.