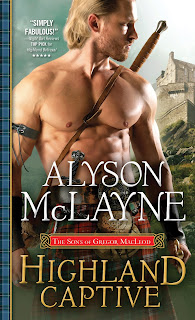 She’d saved his son.
Could she save him as well?

Laird Gavin MacKinnon is a changed man—and not for the better. Ever since his young son, Ewan, disappeared two years ago, Gavin has grown callous and bitter. Scouring the countryside, his search leads him to a mysterious woman who maintains the boy is hers. He decides to take them both and ask questions later.

Deirdre MacIntyre will go with the brooding laird if it will keep her son safe. Gavin has to admit that the beautiful lass has a bond with Ewan, and things aren’t adding up. When Deirdre’s clan comes to claim her under threat of war, Gavin has a choice to make: fight for her or let her go.

Alyson McLayne is a mom of twins and an award-winning writer of contemporary, historical and paranormal romance. She has been nominated for several Romance Writers of America contests, including The Golden Heart, The Golden Pen, The Orange Rose, Great Expectations, The Molly’s and The Winter Rose.  She lives in Vancouver, Canada. Visit her at www.alysonmclayne.com, www.facebook.com/AlysonMcLayne on Facebook or @AlysonMcLayne on Twitter. 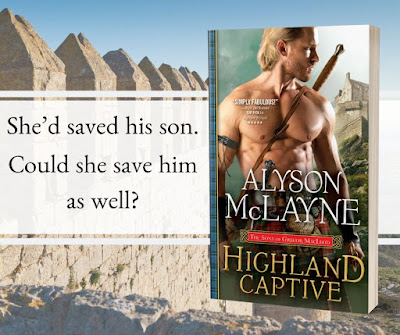