Promo: Sweet Wild of Mine by Laurel Kerr

In a bid to revitalize his career, bestselling author Magnus Gray has come to Sagebrush Flats to write about the local zoo's latest rescue—an orphaned baby polar bear. But Magnus dreads the drama of small towns and is bullishly determined to keep to himself.

June Winters is a people person, and delights in welcoming Magnus to Sagebrush Flats, though it seems unlikely she can get the handsome stranger to crack a smile. Then a mishap with an open gate forces Magnus and June to deal with a stampeding flock of fainting goats, an adorable but clingy polar bear cub, a cranky pregnant camel, and two star-crossed honey badgers. Never mind small town drama—the lively animals may just convince these two that opposites really do attract...

Where the Wild Hearts Are Series:
Wild On My Mind (Book 1)
Sweet Wild of Mine (Book 2) 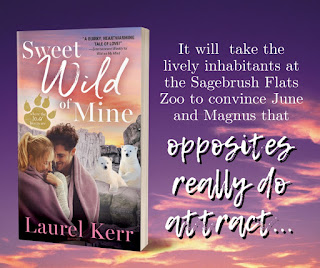 ***
Excerpted from Sweet Wild of Mine by Laurel Kerr. © 2019 by Erin Laurel O’Brien. Used with permission of the publisher, Sourcebooks Casablanca, an imprint of Sourcebooks, Inc. All rights reserved.