Promo & Review: Smitten by the Brit by Melonie Johnson 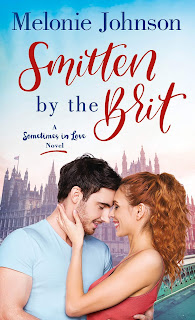 Bonnie Blythe traveled to Europe last summer with her best friends from college. Now in less than a year her friend Cassie will marry a Scotsman. A man who followed Cassie back to Chicago. Bonnie has been engaged for years to Gabe, and he wouldn’t even come with her tonight. This weekend he had an appointment with his advisor. He doesn’t want to marry until he finishes his PhD. She is feeling frustrated and jealous. She is at the Chicago Shakespeare Theater Gala for the Bard. While there, Cassie insists she meet a woman from Cambridge University who wants Bonnie to teach an ICE (Institute of Continuing Education) seminar this coming summer in England. She also encounters a British man she met in London, Theo Wharton, Cassie’s fiancé’s best friend and best man. Theo excites her...but she is engaged. She leaves the gala early. Walking into her apartment she encounters a very unpleasant surprise. Gabe is having sex with another woman. She throws her engagement ring on the bed and leaves. Luckily, she has friends, one of whom lets her use her family’s reserved hotel room. Just by chance the same hotel and the same floor where Theo has a room.

Theo’s mother arranged his stay in Chicago to help a family friend his mom wants him to marry for her family’s wealth. Since his spendthrift father’s death, Theo has had a hard time keeping his own ducal estate intact. The woman doesn’t interest him, but Bonnie does. Soon he and Bonnie are sharing an intimate encounter. Bonnie tells him she will call him in a month when she arrives in Cambridge, but she doesn’t.

SMITTEN BY THE BRIT’s Bonnie and Theo are challenged in romance, one betrayed in love and the other under financial duress. Before going to England, Bonnie’s college friends inform her on how to handle oral sexual encounters. For all her sex with Gabe, Bonnie is rather inexperienced. The information will be useful. The story is filled with pathos, anxiety, and humor, and both characters have much to overcome to reach what they desire. Can Bonnie overcome how Gabe’s betrayal affected her, and can Theo surmount his mother’s wishes? Both will need willpower and perseverance.