Book Giveaway: The Rogue of Fifth Avenue by Joanna Shupe 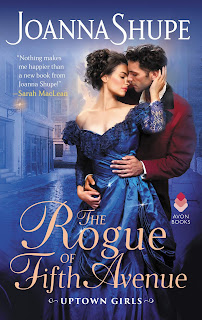 THE ROGUE OF FIFTH AVENUE – Joanna Shupe
Uptown Girls Series
Avon Books
ISBN: 978-0-06-290681
June 2019
Historical Romance
New York City – 1891
Frank Tripp is an uptown lawyer who has uptown clients. He owes it all to a kindly boss in his youth who understood Frank’s potential despite his poor background. Now, as a partner in a prestigious law firm, Frank has important clients, especially Duncan Greene who has hired Frank to keep his eldest daughter, Mamie, out of trouble. The problem is, she seems determined to find trouble by visiting seedy gambling venues, and other inappropriate establishments, sometimes with one of her younger sisters. The only reason Frank hasn’t turned her into her father to deal with is because Frank is rather attracted to Mamie, hoping he can reason with her before something bad happens.
Mamie Greene has been promised to Chauncey Livingston since birth. Their fathers want to unite two powerful families. After getting her father to agree to let her sisters choose their own husbands in the future, Mamie is committed to the marriage, but in the meantime, she wants to live life as a free woman. When her father’s lawyer catches her at a well-known casino picking someone’s pocket, she angrily tells him to mind his own business. What no one knows is what Mamie does with the money she either wins at gambling or “appropriates” from their rich customers. She cares about the poor and feels the need to help in any way she can.
Having a rich, powerful client who can make or break Frank, but who also has a beautiful, lively daughter who seems determined to rock the boat, has left Frank in a bind. Despite their testy verbal battles, he knows she is as interested in him as he is in her. But they are of two different worlds, and Frank knows Duncan Greene would destroy him if he pursued the lovely Mamie. So, he must keep her out of trouble, and deal with his own feelings. And then Mamie hires him to represent a downtrodden wife who killed her husband.
THE ROGUE OF FIFTH AVENUE is kind of a misnomer in my eyes. Frank doesn’t come off as a rogue as much as a smart man who has struggled through life and made something of himself. It doesn’t mean he doesn’t have “urges”, though! Mamie is a kind young woman who is trying to remove the Victorian shackles and move into a more modern world. While she doesn’t loath her future husband (she has known him all their lives), she is not thrilled about wedding him. Obligation is one thing, love is another.
Here’s hoping readers get to find out what happens to Mamie’s younger sisters in future novels. THE ROGUE OF FIFTH AVENUE was a delight to read.
Jani Brooks

If you're interested in winning a print copy of this book, make a comment and you'll be entered in the contest.
Open to US mailing addresses only.
Contest ends midnight on 5/31/19.

I read the 3 books in Joanne's Four Hundred series and they were excellent stories...loved everyone of them. I' have 2 of her Knickerbocker series on my TBR shelves and both books in this latest series on my books to buy. She is now one of my auto-buy/read authors. Would love to win a copy of this book! Thanks for the chance.

Intriguing! Thanks for the chance :)